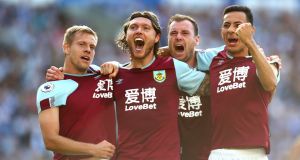 Substitute Jeff Hendrick grabbed a 90th minute equaliser as Burnley held Brighton and Hove Albion to a 1-1 draw at the Amex Stadium in the Premier League on Saturday. French forward Neal Maupay had put Albion ahead in the 51st minute, with his second goal of the season, volleying home a cross from Solly March.

But Burnley manager Sean Dyche threw up on strikers Matej Vydra and Jay Rodgriguez in the search for a point and the move paid off when Czech Vydra slipped the ball to Hendrick on the edge of area and the Republic of Ireland international drilled the ball home. Both teams are on five points each, with one win and two draws from their opening five matches.

Mauricio Pochettino got the perfect response to the summit talks he held with his Tottenham squad as a first-half blitz saw them hammer Crystal Palace 4-0. Pochettino got his group together this week following the closure of the European transfer window to galvanise them and it did the trick as they posted a joint-record win at their new stadium.

They got the job done in the opening 45 minutes thanks to Son Heung-min’s double, a Patrick van Aanholt own goal and Erik Lamela’s fourth. Having suffered such an unsettled start to the season, where a host of their players’ futures were uncertain, this will feel like a watershed moment and the catalyst for getting back to the level of the past few years.

Palace, who had only conceded two goals prior to this game, had an afternoon to forget as they were unable to replicate their impressive win at Manchester United. They would have been optimistic of getting something as Spurs had laboured in their opening two home games of the season, where both had followed the same pattern of conceding an early goal and then struggling to break down the opposition.

But they were in no mood to allow that to happen for a third time and produced one of their best 45-minute performances in recent times. They had two shots inside the opening minute, from Harry Winks and Son, before the South Korean continued his love of scoring against Palace by giving his side a 10th-minute lead.

It proved the perfect launchpad for Spurs to get the game won inside the opening 25 minutes as they blitzed Palace with two goals in 100 seconds and returning defender Serge Aurier created them both. The Ivory Coast international, who was making his first start of the season having admitted he wanted to leave the club in the summer, will try and claim the first as it was his cross - after being set free by Son - that Van Aanholt turned into his own net.

Less than two minutes later a team move that involved Lamela, Christian Eriksen, Winks and then Aurier ended with Son thrashing home a low volley at the far post from the right-back’s brilliant cross.

Spurs’ attacking players were causing Palace no end of problems and they were rewarded with a fourth goal in the 42nd minute and it was another fine team effort. Son was involved again as he found Kane on the right hand edge of the penalty area and the England captain whipped in a delicious cross which was begging to be converted, with Lamela making no mistake.

Moussa Djenepo marked his first Premier League start for Southampton with the winning goal against Sheffield United at Bramall Lane. The Mali international forward, signed from Standard Liege in the summer, scored the only goal of the game after 66 minutes to give Saints a 1-0 victory.

It settled a match in which both teams spurned gilt-edged chances, especially in the first half, and overall it was harsh on the hosts - who had a goal ruled out for offside following a VAR review shortly before Djenepo struck. The Blades’ frustration was compounded late on when substitute Billy Sharp was shown a straight red card after catching Stuart Armstrong on the shin with a late challenge.

The game sprung into life after 11 minutes when former Blade Che Adams’ volley from the edge of the penalty area thumped against the foot of the post. Immediately at the other end, a counter-attack saw David McGoldrick through one-on-one with Angus Gunn but the Southampton goalkeeper blocked the Ireland international’s effort.

Southampton had a couple of good chances just before the half-hour mark as the match continued to ebb and flow. Cedric Soares should have done better than blast the ball into the side-netting from a tight angle, before Dean Henderson produced a superb save to claw out a header from Adams. McGoldrick was unable to control his touch at the far post from a driven cross from Oliver Norwood when it looked like he would score.

Southampton took the lead just after the hour when Boufal nicked possession in midfield. Djenepo showed good strength to hold off the challenge of Norwood, who tried to foul him at least a couple of times, before jinking his way into the penalty area and beating Henderson with a low shot into the bottom corner of the net. Fleck flashed a shot just past the post from 25 yards out as the hosts tried to equalise and McGoldrick was denied by Gunn again. However, Sharp’s red card against his former club all but ended any hopes they had of getting anything from the match.