Ireland release 13 players back to their provinces 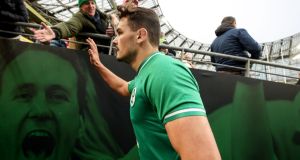 Ireland head coach Andy Farrell has released 13 players back to their provinces while retaining a further 23 for a two-day camp in the Cork Institute of Technology during which they’ll have an opposed training match with the Ireland Under-20 team.

Caelan Doris, who failed a HIA after four minutes of his debut against Scotland and wasn’t considered for the Welsh match, will stay with the Irish squad and is therefore a strong contender to play against England at Twickenham on Sunday week. Will Addison (calf) missed both Six Nations matches but has been nominated to travel to Cork.

Robbie Henshaw, despite not returning following a HIA on 44 minutes against Wales, will stay with the national squad. Max Deegan, who made his Ireland debut as a replacement in that game, has returned to Leinster where he’s likely to be included for the province’s Pro14 game against the Cheetahs on Saturday at the RDS.

Leinster hooker Ronan Kelleher requires match practice - he played 20 minutes in total in winning two caps off the bench with Ireland in the last fortnight - after a hand injury in December kept him sidelined until the Irish training camp in Portugal. He should also be in action this weekend against the South African franchise.