Torrential rain on Wednesday night resulted in change of venue as 3,500 fans miss out 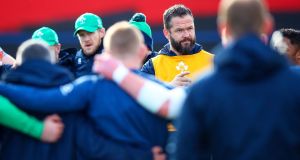 Ireland head coach Andy Farrell has expressed his regret over the weather enforced cancellation of Ireland’s planned open session with the Irish under-20s which was to have been held in front of 3,500 spectators in the Cork Institute of Technology on Thursday.

Torrential rain forced the Irish management to relocate their session to Musgrave Park but due to the short notice and ensuing security arrangements, the session had to be closed.

Describing it as “an interesting couple of days” Farrell added: “We trained yesterday and the pitch was soft. It was good, a decent session. The groundsmen had done as much as they could, but the rain was torrential last night. We got up early this morning and it wasn’t fit for purpose.

“We’re gutted because we tried to transfer everything and we weren’t able to do that so the kids missed out. We came down to Cork to connect with the Cork people and the 3,500 people that were gonna come and see us train – we could have connected and signed autographs at the end of the session. There was none of that because of the safety regulations.

“We had a care of duty to the players – the 20s and our lads – we ended up with a decent session in the end. We’re happy with that but gutted for the people of Cork.

“That’s why we do those sessions, why we go all over the country if we can,” added Farrell. “It was unfortunate circumstances with the weather. We’ve trained in the past on heavy pitches and came away with injuries along the way. I think it was the right call for the team, gutted for the people.”

Farrell confirmed that Robbie Henshaw and Johnny Sexton (who both departed for HIAs in the 24-14 win over Wales) had recovered to take part. Whereas Rónan Kelleher was the only player from last Saturday’s matchday squad to return to his province due to his need for game-time, Farrell explained why Caelan Doris, who was not considered for the Welsh game following the concussion he sustained in the early stages of his debut against Scotland, remained with the squad for their two-day camp in Cork.

“The reason we kept Caelan available, he missed most of last week, so [we wanted] to keep him up to speed. It was good for him after his return [to play] stuff. He’s in the clear now and he’s had a good couple of days which is great to see from him.”

Kelleher is one of a dozen players whom Farrell and the other Irish coaches will be watching in action for their provinces this weekend, and was clear in what he wanted to see.

“Hopefully, a vibrant bunch, who are re going to put their hand up and make us take note. We’ll be watching this weekend.”

Although it would seem hard to see anyone breaking into last week’s 23 other than Doris, Farrell was true to his word prior to Christmas that the squad is not a closed door when some players overlooked for the December camp returned for the Six Nations.

Pleasing though the wins over Scotland and particularly Wales were, this week’s camp provided Farrell and the squad the chance to put to rights some of last Saturday’s imperfections.

“There’s plenty,” the head coach admitted. “Honestly, there’s plenty. The point of the two-day camp that we’ve just had was to make sure that we recognised those areas and that we try to eradicate those errors in our session against the 20s today.

“It was a pretty important session for us because we used it like game-day preparation. We’ll meet back up on Monday night and we’ll review that session as though it was a game. There’s plenty of learnings on Wednesday and certainly this morning before the session. It was a decent session. Because of those learnings, we trained pretty well. That was pleasing.”

Asked to specify those areas, Farrell said: “Well, the obvious bits that you guys would know as well as us. We created plenty of opportunities and there’s some great play to get us there but we didn’t convert them all.

“On the back of that, we probably created a few more opportunities than we thought, that we didn’t recognise which is something that has been a bit obvious to us as well. Getting better at most things. Our set-piece got better, it can certainly keep getting better and that’s what we’ll want to do. Our counterattack is on an upward curve but we missed some opportunities there. In general, most things that need to get better and have to, with the week that’s coming up next week.”

Buoyed by the two wins over their Celtic rivals, Ireland head to London for a shot at the Triple Crown at Twickenham against England on Sunday week and Farrell said the squad were “as confident as you can be going to Twickenham”.

“We know the task in hand. We know what awaits you when you get there. We know that England are pretty proud to play at home like we are to play at the Aviva. We feel like we’re in a decent place.

“We’re looking forward to next week. We’ve had a good couple of days here. I’m sure the lads are relishing coming into camp on Monday night, looking for a big week ahead. We’ll need to be like that.”