Six Nations: Joe Schmidt is back, coaches and captains beware 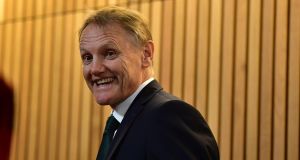 Schmidt lays down the laws

Joe Schmidt is back people! And the referees are his new pet project. Some advice for the Six Nations touch judges and TMOs: keep your refs safe but your room key safer.

Jokes aside, Schmidt is the ideal poacher turned game keeper. Nobody has a greater knowledge of the laws and now he has laid out in typically precise detail the do’s and don’t’s that will be rolled out during the championship.

“Should we sell all our decisions? Clearly NOT,” said Schmidt and World Rugby’s head of match officials Joël Jutge in a Powerpoint presentation to arm refs with clarity around the game’s minefields, namely the breakdown, lineout maul and scrum.

“Communication must be reduced,” Schmidt added, presumably in reference to the increasing examples of refs engaging in conversation with players who know the rules better than they do.

Amidst a range of video examples of best practice - Kyle Sinckler’s “are you f***ing serious” outburst was used as the antithesis of “rugby values” - Schmidt’s committee honed in on the “head, neck and throat” contact by warning refs that they “must focus on the actions of those involved not the injury.”

Best of luck to the captains and coaches, who better have their facts straight before firing a rocket at the gang they have taken to branding “apologists,” because there’s a new sheriff in town.

The Six Nations show runners brought a ray of sunshine to the lives of female and under 20 male internationals with news that their 2021 tournaments will happen in April and June respectively.

The difference between the senior women and junior men is clarity. The former has some, the latter has all it desires. The girls must compromise with only three test matches but the boys get the usual five “in the same format as originally planned” condensed into three weeks.

The women have “either or” dates with no confirmed venues while the teenage lads got a June 19th kick off.

This is how rugby is still being presented to the public in 2021. Now, to lean on the positive: Katie Sadleir, the general manager of women’s rugby, is expected to deliver sustainable improvements in the coming months, with their Six Nations ideally moved out from under the men’s shadow, and into a permanent slot in April that should tempt sponsors and broadcasters to increase investment.

But now more than ever they need more not less games. The Covid excuse will have to wash for now.

The day the Five Nations changed its name as Italy provided a wildly false narrative of what would follow over the next two decades with a 34-20 defeat of Scotland at Stadio Flamino in Rome. Diego Dominguez was in his pomp as the Argentinean clipped three drop goals in a stunning 29 point return.

That Saturday afternoon also marked a horrendous low for Irish rugby as the greatest England team any of us have seen ran riot at Twickenham. The 50-18 pounding proved the end of international rugby for Conor O’Shea with Dion O’Cuinneagain cut loose soon after, while Bob Casey - a young lock of untold promise - had to wait nine years for another cap.

It is always darkest before the young outside centre goes on a mazy 60 metre break to create a try for Kevin Maggs. The dawn followed against Scotland. The rest is well told.

Johnny Sexton can mark his 100th cap for Ireland against England on March 20th. Sure what could possibly go wrong in the interim? Beware the 90-something club members, Jamie Heaslip (95) and Peter Stringer (98), who fell agonisingly short of the milestone.

“The manner you will communicate will be observed closely.”

Plenty are piling into Josh Adams for the spectacularly short-sighted decision to have a “gender revealing” party at a family member’s house to celebrate the upcoming birth of his daughter.

Someone was bound to breach Covid protocols and hopefully the action taken in the Welsh squad after Adams trained on Tuesday will prove enough to avoid the worst case scenario of Sunday’s match being cancelled. The second round of test results comes out this morning.

At least Adams gets to spend some of his two match suspension at home with his pregnant partner. It was foolish to fly in the face of clearly laid out guidelines by attending an “immediate family gathering” during lockdown but one international out of 250 at least provides a cautionary tale. The punishment is sobering for the superb winger and his country, but it serves the purpose of sending a warning jolt through every Six Nations camp. Adams need not be flogged in public any more for expressing joy, however stupidly, about his incoming baby girl.

Walk tall, golfers, and tell Leo that golf is not the enemy at the gate 06:35
Mick’s millennium: McCarthy clocks up his 1,000th game as manager 06:00
The interpros give players a chance to prove the coaches wrong 06:00
Pro14: Munster-Connacht rivalry set to take on a sharper edge 06:00
Indoor Championships draws record number of athletes despite pandemic 06:00
Crossword Get access to over 6,000 interactive crosswords