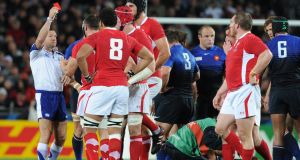 Referee Alain Roland issues a red card to Wales’s Sam Warburton for an alleged spear tackle in the semi-final of the 2011 World Cup in New Zealand.

World Rugby has claimed this week’s introduction of two new categories of dangerous tackling offences, sanctioning reckless and accidental head contact, is as a result of what it calls an evidence-based approach to player welfare.

As part of this approach, injury surveillance studies are carried out at all international competitions and the results inform World Rugby’s player welfare initiatives, including rule changes.

These results, which were consistent with previous surveys, duly fed into World Rugby’s zero tolerance approach to head contact.

The above presents an overly neat picture of the new head contact rules. Although World Rugby’s approach is not in any way similar to the NFL, which until very recently denied any links between playing football and the high incidence of chronic brain trauma suffered by its ex-players; nevertheless, both organisations have operated in fear of player-led litigation.

Faced with evidence that up to one-third of retired NFL players had measurable brain damage relating to their careers, the NFL famously agreed an US$1 billion dollar settlement with the players, finally confirmed by US Federal Courts in 2016.

Less well publicised have been the rule changes, financial support for further medical research and enhanced pitch side concussion protocols implemented by the NFL as part of the settlement process.

Can a similar pattern of response be seen in professional rugby?

In 2016 Cillian Willis and Jamie Cudmore announced there were suing their former clubs for alleged clinical negligence claiming that their employers negligently exposed them to further injury by permitting them to play on post-concussion.

The dangers of playing on while concussed can be seen in the tragic fatality in 2011 of Ulster schoolboy Benjamin Robinson. Last year his parents issued civil proceedings against World Rugby not only for negligence regarding concussive-type injuries but also for breach of the governing body’s primary duty of care regarding the safety of the game.

Rugby has previously had to deal with player-led litigation. In the 1990s it faced a number of claims, principally in Australia, relating to the safety of its then scrum laws. The litigation, taken by players rendered paraplegic in collapsed scrums, claimed the rugby authorities had failed in their duty of care to update and ensure the consistency of scrum safety laws.

Echoes of that litigation can still be heard in the “Crouch-Bind-Set” commands of today’s referees and in rule changes relating to uncontested scrums when no suitably trained replaced front row is available.

Similarly, in a 2005 case from Australian rugby league, a player, Jarrod McCracken, successfully sued two opponents and their club for neck injuries resulting from a spear or tip tackle. The Australian litigation was rumoured to be the reason for the All-Black’s reticence to apologise to Brian O’Driscoll in the aftermath of the first Test of that year’s Lions Tour.

Spear tackles were subsequently outlawed, as seen most famously in the red card issued by Alain Rolland to Wales’s Sam Warburton in the semi-final against France at the 2011 World Cup in New Zealand.

More recently still, World Rugby will also have been aware of the litigation begun this year, again against the rugby league authorities in Australian (NRL), by a player, Alex McKinnon, paralysed in a so-called “lifting” tackle in a 2014 game. As McKinnon’s medical care costs rise, compensation is being sought in the courts and as part of the proceedings scrutiny has fallen upon the NRL’s allegedly negligent regulation of such tackles.

The McKinnon case has interesting legal, insurance and medical repercussions for both rugby codes. At its heart is a tackling technique whereby a player is lifted and held by one opponent into a position that makes them vulnerable to secondary hits by others and some concern has been raised in rugby union circles with regard to this aspect of the choke tackle.

First, one can expect some medical and legal focus on not just compliance with head injury assessment (HIA) protocols in the professional code but also as to whether such HIA protocols are fit for purpose in the first place in terms of adequate injury rehabilitation and recovery time.

Second, past experience from other sports suggests that the type of litigation that bites the most tends to come, not from well-insured professional players but at the amateur, voluntary or even youth level by participants who claim to have been negligently exposed to injury and/or not adequately informed as to the risks.

Finally, whatever the underlying reasons for this year’s rule changes in rugby – be they player welfare, the image of the game or litigation apprehension – they should be first given a chance to work on the field of play to the benefit of all rugby players and not in the courts for the restricted benefit of lawyers.

Jack Anderson is a Professor of Law at Queen’s University, Belfast @sportslawQUB