Ulster face being without Ruan Pienaar sooner than expected

Les Kiss has a shortage of players available at scrumhalf, outhalf and in the frontrow 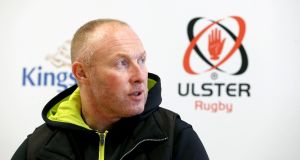 Ulster are about to find out, way sooner than expected, what life without Ruan Pienaar will feel like.

“I don’t envisage him being out six months or even until the end of the season,” said head coach Neil Doak after revealing the 88-time capped Springbok sustained a knee injury despite finishing the 22-7 defeat to Leinster on December 31st.

“If it is anything,” Doak added optimistically, “it will probably be the next couple of weeks.”

The very weeks that matter most as Ulster’s season balances on a knife-edge.

Pienaar will leave Belfast this summer after seven years because the IRFU refused to allow a third contract for the 32-year-old.

Scrumhalf cover, along with outhalf and the frontrow, is suddenly a major area of concern as Les Kiss’s team appear to be stumbling into crucial journeys to Llanelli and Exeter. Defeat in England will confirm non-qualification to the Champions Cup quarter-finals for a third successive year.

In November former Blackrock College student Angus Lloyd was rerouted from Ulster to Munster to provide cover in Limerick. Tomás O’Leary had joined Montpellier in search of an Indian summer. So, after Paul Marshall, who clearly struggled at the RDS on New Year’s Eve and during October’s loss in Bordeaux, the number nine cupboard is notably inexperienced.

Dave Shanahan, also overlooked by the Leinster academy despite impressing at Belvedere College, and Aaron Cairns, an Ireland Sevens player from Ballynahinch, are next in line.

“Obviously Ruan is a key player for us,” Doak continued. “If Paddy Jackson goes to Ireland for the Six Nations, and hopefully he will, we’ve got Brett Herron there, maybe Johnny McPhillips will play Six Nations under-20s so those are the two guys we will look at as well [at outhalf].

“Peter Nelson is hopefully coming back from injury and he played 10 at the start of last season and did very well. He is back training with us the last couple of weeks so we’ll try and get him up to speed.”

Yet when Jackson was unavailable against Leinster, Kiss turned to Pienaar at outhalf.

Judging from Connacht coach Pat Lam telling of the IRFU’s flat refusal to temporarily promote his son, Mitch Lam, on a free contract despite Connacht being without all four registered outhalves, the latest message from David Nucifora is that every province must make do with their current rosters.

There do not appear to be anymore exceptions.

“Four guys picked up knee injuries against Leinster and a few of them will be longer than others,” said Doak.

The other three are Roger Wilson, Rob Herring and Rodney Ah You, with the latter pair ruled out for six weeks, which increases the frontrow injury crisis to five bodies. Wiehahn Herbst tore his calf muscle, Kyle McCall is probably done for the season with a ruptured hamstring and Ricky Lutton has a broken toe.

“A few young guys will be getting opportunities over the next couple of weeks. It is difficult to pick up any replacement as this stage of the season. I’m sure Les and Bryn [Cunningham] will be looking to see what is available. Jonny Simpson and Ross Kane, those guys have done a decent job for us. They are inexperienced but that’s part and parcel of the game now; you need a full squad to get you through the season. We just got to make sure whoever comes in is prepped as well as can be.”

The wonder is if current injury reports are showing a spike or maybe the provinces are more forthcoming with their information to provide a context for poor results.

“I know over the last couple of seasons we have been pretty decimated at certain stages,” Doak admitted. “But sometimes there are just freak injuries that happen.

“We know the next three weeks are going to be crucial and if you dwell on it too much it becomes a negative focus and that’s not what we are about.”

Paddy Jackson, Rory Best and Iain Henderson return for Friday’s trip to Llanelli. Then it is Exeter Chiefs at Sandy Park. Lose that and Bordeaux Begles in Belfast will be largely irrelevant.

Responding to concerns about Ulster’s five from eight defeats on the road, Doak said: “There is no secret formula. We’ve just got to make sure we stop giving the home side a start in the game that we gave Leinster.

“At home you do have those home comforts and create more opportunities and are maybe a little more cynical. Against Leinster we created numerous opportunities. We just didn’t finish. That has been our Achilles heel. We made more line breaks than Leinster but slipped up defensively a couple of times. They worked hard in defence. I thought Luke McGrath made a couple of great tackles that denied us some great opportunities to score. That’s a great credit to him.”

Ulster probably need two bonus-point victories to reach the Champions Cup quarter-finals. In fairness they have won in Cardiff and Glasgow this season. So it is not impossible. Although, without Pienaar it might be.