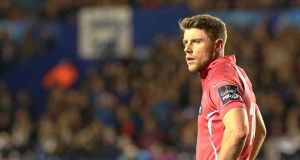 Wales fly half Rhys Priestland will leave Scarlets to oin Bath at the end of the season (Photograph: INPHO/Simon King)

The Wales international outhalf Rhys Priestland is to join the Premiership club Bath from Scarlets, the Welsh region have confirmed.

In a statement, the Scarlets said the 27-year-old Priestland will leave west Wales at the end of this season.

He becomes their second major signing for next term after Glasgow’s Fiji international scrum-half Niko Matawalu, while Bath have also been strongly linked with the South Africa Test No8 Duane Vermeulen.

Priestland joined the Scarlets in 2005, graduating to the first team via their academy system. He will contest the Bath No10 shirt with the England international George Ford.

Priestland was not among the current group of Wales internationals to be offered national dual contracts – deals funded by the Welsh Rugby Union and Wales’s four regions from a £3.3m pot.

Priestland said: “I have thoroughly enjoyed my time here at the Scarlets. There have been some great highs and some heartfelt lows. I have been lucky to have been involved in some fantastic fixtures, and career highlights here at the Scarlets would have to include representing the region in the Heineken Cup over the years.

“The Scarlets has been my home for a number of years, and all that I’ve known as a club as a senior professional player.

“I will certainly miss the place and will be leaving some great friends behind, but there’s a long way to go this season.”

In Bath’s statement, Priestland added: “My entire rugby career has been spent in Wales, and although I’ve enjoyed that time enormously, I need a new challenge. I’ve been really impressed watching Bath develop over the past couple of years into one of the most exciting teams in the country. It’s a world-class organisation in every sense, including the players, coaching staff and facilities.”

Bath head coach, Mike Ford, meanwhile, was delighted with Priestland’s signing. Although the length of contract has not been revealed, it is thought he has agreed a two-year deal.

“Rhys is a fantastic player with an impressive pedigree – his record with Scarlets and Wales speaks for itself,” Ford said. “He’s got a wide range of talents that suit our game-plan, and he will make a great addition to our squad.

“He’s still quite a young guy, but one with a lot of experience that will be really valuable, especially in the development of our younger players.”

Whether or not Priestland’s move to Bath will have any effect on his World Cup prospects later this year remains to be seen. He shone for Wales during the 2011 tournament in New Zealand, and he is likely to be part of Wales head coach Warren Gatland’s Six Nations plans.

Reflecting on Priestland’s impending exit, the Scarlets head coach, Wayne Pivac, said: “We are disappointed to see Rhys go. He has been a big part of the region for a long period of time and is a true professional both on and off the field. We appreciate that this is a great opportunity for Rhys to further develop and progress on a personal level.

“As a region we were keen to retain Rhys’ services, but were unable to do so. Despite our desire and commitment to retain all of our international players within the region, there are times when it’s not the right decision for the individual player at the time.

“Rhys has developed into a skilled outhalf who commands excellence at all times, and his leadership qualities, experience and maturity will be missed. This is an exciting new challenge for Rhys. He goes with our blessing and he will always be a Scarlet. He has been a great servant, and we wish him well with his future.”

1 Born to ride, born to win: Sam Bennett, the making of a green machine
2 Dreal Deal’s Navan win to be investigated as huge gamble lands
3 Next stop the Champs-Elysées in green for Sam Bennett
4 Keith Duggan: Surreal story of John Delaney needs to act as a wake-up call for FAI
5 Saracens’ emphatic opening salvo enough to keep Leinster at bay
Real news has value SUBSCRIBE