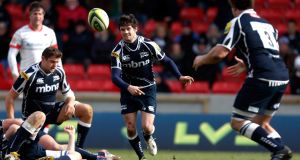 Cillian Willis in action for Sale during the LV= Cup semi-final against Saracens at Salford City Stadium in March, 2013. Photograph: Paul Thomas/Getty Images

Sale Sharks have released a statement “concerning litigation” between the club and former player Cillian Willis, the ex-Leinster scrumhalf who was forced to retire with concussion issues sustained while playing for Sale against Saracens in March 2013.

“Whilst it is correct that Mr Willis did commence a legal action against the club in 2016,” the statement read, “Mr Willis subsequently discontinued that claim on March 2018, without any payment of compensation being made by Sale Sharks.”

Next month Willis enters court proceedings in Manchester with a medic who treated him during the same LV Cup match against Saracens almost six years ago.

Ian Keatley will join Treviso next season, according to reports on the42.ie and in the Limerick Leader. The 31-year-old, capped seven times by Ireland since 2009, has been unable to regain the Munster No 10 jersey since Joey Carbery’s arrival in Limerick, JJ Hanrahan’s return to form and Tyler Bleyendaal’s return to fitness.

Treviso need an outhalf to provide cover for Tommaso Allan and Ian McKinley during the World Cup.

Jaco Taute and James Hart are also set to leave the province.