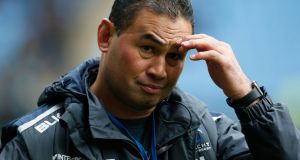 Pat Lam: “We’re only three points off, so a win next week changes everything again.” Photograph: Paul Childs/Reuters

The odds were always most heavily stacked against Connacht completing an Irish four-timer in this weekend’s absorbing European Champions Cup matches.

Having threatened to defy them for over an hour at the Ricoh Arena, regrets they had aplenty but there was also enough in their performance yesterday to give them succour for next week’s rematch with Wasps at a sold-out Sportsground.

To all intents and purposes that is close to a must-win game after Wasps racked up a bonus point in yesterday’s 32-17 victory. Wasps now lead Pool Two on 12 points, with Connacht three further back and a point ahead of Toulouse, whose bonus point, 36-6 win away to Zebre on Saturday stood despite the game being abandoned after 63 minutes due to fog.

“If we beat them next week, we go back over them again. We’re only three points off, so a win next week changes everything again. The more frustrating thing is we had a chance to get something out of the game and we didn’t take it. That’ll be motivation for us to get back.

“We’re all looking forward to playing at the Sportsground and giving them a big welcome and tidy up our game. But it’s wide open in the group.”

“I think at times we put them under some great pressure,” with particular reference to the scrum, albeit a malfunctioning lineout coughed up five throws.

“I know our lineout will be better as well. Defensively we let in four tries, but the effort was really good.”

“It was always going to come down to execution and that was slightly off at a crucial time around that 60-minute mark.”

Lam admitted to a sense of relief that a difficult week, which began with him informing the players last Monday morning that he was decamping to Bristol next season, had come to a close.

“Without a doubt, that’s what this team is made of,” said Lam, who cited the last time Connacht had a Sunday 1pm kick-off in England three seasons ago, when Saracens beat them 64-6.

“Back then, we didn’t have absolute clarity on how we needed to play; we didn’t have the collective culture we have now to deal with adversity. It wasn’t that individuals wanted to give up, but as a group we just gave way.”

“We’ve come a long way since then. When you get all sorts of things – not just this week – but right through the time I’ve been here, that’s what makes these guys stronger. That’s what Connacht’s about.

“So, it didn’t surprise me at all that we came in on Tuesday and the boys trained well all week. The effort they give is always huge, it’s just some execution stuff that we’ll tidy up and we’ll get better. I’m really excited about next week.”

Connacht’s cause wasn’t helped by the loss of centre Stacey Ili (ankle), full-back Tiernan O’Halloran (haematoma), winger Cian Kelleher (hamstring) and flanker Jake Heenan (ankle/knee) in a 24 minute period either side of half-time, while Bundee Aki played on with a bruised thigh from early in the game.

Lam was hopeful all would recover, although he pointed out that Wasps’ bigger squad would enable them to cope better with the six-day turnaround.

They lead by one point over Glasgow, after the Scottish club’s eye-catching win away to Racing Metro left the struggling French champions bottom of the group.

Yet Munster’s rearranged game against Racing on January 7th means three of their remaining four games are away from home.

Mindful of this, director of rugby Rassie Erasmus maintained: “You can’t forget where we were last year and where we are coming from. We can’t say this is a new team; we have one or two new players and a few changes in the coaching set-up. We’ll have to do so many things right to get through the pool stages.”

Jaco Taute was outstanding but as things stand he will only play three more games before his loan spell from the Stormers ends at the turn of the year.

Erasmus had not explored whether the loan might be extended but said: “We’ve got to talk to the Stormers and to the IRFU. I’d be lying if I said I didn’t want Jaco to stay. I think there can be a possibility. I think they would be open to try and do that.”

Ulster also remain vibrantly alive after their thrilling 39-32 win over Clermont in Belfast on Saturday, although Les Kiss was disappointed with the visitors’ brace of bonus points which he admitted left them in control of Pool Five.

That said he ranked the performance in “the top three” of his time in charge.

“You are coming up against a massive team in a lot of respects. They are the form team in the Top 14. They had a team that was absolutely loaded. It is up there with the best. I think it is a good dressingroom because we understand to get the job done over there we are going to have to do some things better.

Leinster also sit pretty atop Pool Four after Friday’s 37-10 bonus point win away to Northampton. That effectively evicted the Saints from the competition, with Montpellier now a point behind after their comeback, bonus-point win over Castres yesterday despite the 18th minute sending of prop Davit Kubriachvili.

But Leo Cullen’s squad need only to recall the events of this month three years ago when they recorded a 40-7 win at Franklin’s Gardens and failed to pick up even a losing bonus point at the Aviva Stadium the following Saturday.

“It’s something we’re very, very conscious of. Northampton, as we talked about beforehand, are a proud club so they will come back strong,” said Cullen.

While Northampton are sure to be without the disgraced Dylan Hartley, the Leinster coach noted that Kieran Brookes returns from injury and Calum Clark from suspension.