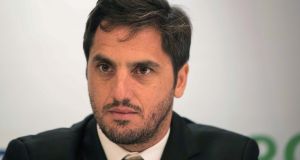 Agustin Pichot: has been a sole voice campaigning for ethical changes to the eligibility laws for several years. Photograph: Billy Stickland/Inpho

There is a very large elephant sitting slap-bang in the middle of international rugby’s room.

World Rugby has a “residency rule” known as Regulation 8. It states that “A player may represent a country after they have resided there for 36 months”.

The residency qualification in rugby is a hangover from the amateur days. If a player lived in another country they could represent their adopted land. Then players were not paid to change countries. Those wonderful Corinthian values are being abused by international unions right across the globe.

The list of players who have played schools, club and senior rugby in the land of their birth and are now representing another country at international level, having qualified under the residence rule is quite staggering.

Australia, France, Ireland, Italy, Japan, Scotland, Wales and England have all selected players over the last year who fall into this category.

Today, when a national team identifies a lack of depth in a position, they actively recruit a foreign player and qualify them.

International unions use the term “project players” to describe the qualifying of non-indigenous players through the 36 -month residency law. It a bit like the banks calling mortgage foreclosures “asset liberation”. It’s a description that hides a grubby business.

It is important to note that the players are not at fault, it is World Rugby’s residency eligibility system that is endangering the credibility of international rugby.

Here is the reality of today’s selections. Thirty six months ago a player living in the south could have been offered a contract from a Northern Hemisphere club and today he can represent that country. That process simply lacks credibility. The current residency qualification law is bastardising the concept of international rugby.

I applaud the brave voice of the former great Puma, Agustin Pichot who has been campaigning for ethical changes to the eligibility laws for several years.

Powerful political figures, lurking within World Rugby, have blocked the much-needed reform of international eligibly regulations and forced a compromise which will see the time for eligibility change form 36 months to 60 months. These changes will not commence until the 31st of December 2020.

The archaic residency eligibility rule should have been scrapped completely but an unholy alliance of unions voted for self-interest over the credibility of the international game. They also activated the law of unintended consequences.

The residency law makes many vulnerable players from the Pacific Islands and South Africa open to exploitation.

In tier two rugby countries in eastern Europe and in the lower divisions of French rugby, the residence rule is used to qualify foreign players, mostly Pacific Islanders and South Africans, for domestic competitions. After 36 months they are considered “local” players and drop off the contract books as a foreign player. This allows the club to contract more foreign players and neglect the development of the local talent and the game.

In the lower levels of rugby in Europe many Pacific Islanders and South Africans live in very poor conditions. It is much cheaper for the clubs to underpay vulnerable foreign players than to run academies and develop the local talent.

World rugby is not the governing body of just the wealthy nations. It must be the protector all rugby players worldwide.

The integrity of the game and the welfare of players has to be prioritised above international team recruitment.

The first step for World Rugby is to acknowledge that there is a problem. The political compromise to extend the eligibility law to 60 months was an attempt to silence Agustin Pichot’s voice.

Pichot is a rugby man who deeply loves the game. Rugby needs him.

Gus, please keep calling out this abusive system. There is an ocean of support for what you are doing. We admire the courage of your activism. Don’t stop.

Before 1996, players representing a country other than the one of their birth was very rare. The residency law was put in place to support the very unusual situation of players moving to another country. The game was amateur so there was no money involved to entice a player to another country.

From ‘Kilted Kiwis’ to ‘granny gate’, the residency regulation has been abused by national teams to recruit foreign players through encouraging their feeder clubs to fill their player depth charts with talent born, developed and nurtured in another country.

Players are changing their rugby nationality for money. Professional contracts are powering the change in nationality and World Rugby is complicit in allowing the international game to be bastardised because of money.

World Rugby must acknowledge that under its governance the residency law is also enabling unscrupulous administrators and owners in the lower leagues and Eastern Europe to exploit vulnerable players. All of the clubs that are exploiting players are in Europe, not in the third world.

At the upcoming RWC Fiji, Samoa, Tonga, South Africa and Argentina will have players that truly represent the indigenous players of their countries. Many of the rest have used money and the political system within rugby to recruit players.

The international game of rugby should be ashamed that such a state of affairs can exist in a game that prides itself on living the highest of sporting ethics.