Connacht aiming to end festive period on a high 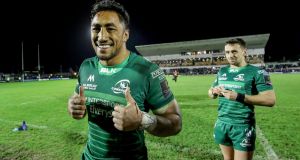 Connacht are looking to round off what would be a most “positive” festive interprovincial period with a victory over Munster at the Galway Sportsground on Saturday.

Just three points separate the two sides on the Pro14 Conference A table, and with Andy Friend’s squad in a “pretty good state” after their victory over Ulster last weekend, defence coach Peter Wilkins says there is a lot riding on this third successive interprovincial game, which could see them overtake Munster into second place.

“It is hugely significant in terms of standing in the conference, it being an interpro, and obviously a local rival, but equally is the perspective on this block of games. We were hugely disappointed how the Leinster match finished, but if we win this game, then overall this three game block looks pretty positive,” Wilkins explained.

“There is huge motivation, as if anyone needed it, in the context of this Christmas and New Year period, and in setting up for the following block.”

Connacht happily report no fresh injuries following their 22-12 win over Dan McFarland’s side – the first double in the professional era over Ulster –, and Wilkins reports that “everyone who fronted last week is available” for selection.

However, Ireland centre Bundee Aki is the biggest doubt, having played against both Leinster and Ulster.

“Obviously Bundee is someone whose minutes we have to monitor over this period which is fair enough, and he took a little knock over the weekend, so he is doubtful. But everyone has a clean bill of health from the Ulster game which is a real positive after such a physical and attritional game.”

With Aki’s minutes being monitored, recent on-loan recruit Tom Daly is ready to make his first appearance, while Kyle Godwin, forced to play on the wing last weekend, could also slot into the midfield alongside Tom Farrell. Left wing Matt Healy has recovered from an ankle injury, but fullback Tiernan O’Halloran remains sidelined with a calf injury.

Daly, one of three on-loan players, is also in contention after two weeks with the squad since his move from Leinster, while former Munster man Stephen Fitzgerald made his appearance as a replacement last weekend, and scrumhalf Angus Lloyd is also on loan.

“The three lads had been hugely important to us for this period when we needed immediate fixes in certain positions. To have those guys on loan and to fit in seamlessly has been really important. Tom has come in and he’s desperate for game time, and it’s good if we can give him that opportunity.

“It’s terrific for him and equally for us – he’s a good player. He probably hasn’t had too much rugby in the last two years, but he’s raring to go and I think he will do a good job if he is selected.

“We have been a little thin across the back three, and we’ve had Godwin playing more rugby on the wing than in the centres, and he’s done a really solid job for us there, but our preference is to see him get more time in the centre,” says Wilkins.

“The injuries we have had – Niyi Adeolokun doing his bicep in South Africa and we’ve had to rearrange it a bit, and we’ve probably had guys playing more minutes than we had originally planned, but we are weathering the storm.”

Scrumhalf Caolan Blade will continue to wear the number nine shirt in the absence of Kieran Marmion who is due for a return next month. The Monivea man has featured in every Connacht game this season, and Wilkins said he has been terrific for the club.

“He is the only player to be involved in every game this season, which is a huge amount for someone who may have had the perception of being the number two behind Kieran Marmion. He has obviously grabbed the opportunity.”

1 Jack Nicklaus’ Trump endorsement leads to avalanche of dismay
2 Six Nations - France v Ireland: Kick-off time, TV details, permutations, team news and more
3 World Handicap System: What is it? How does it work? Will my handicap change?
4 Here is your handy guide to sport on television this week
5 All-Ireland Senior Football Championship 2020: Our writers’ and pundits’ predictions
Real news has value SUBSCRIBE

Home comforts for Walker as he seals win for Man City 14:52
Valtteri Bottas pips Lewis Hamilton to pole position in Italy 14:47
New Zealand blow Australia away with record victory 13:22
Nobby Stiles: A diminutive midfield enforcer who reached the very top 12:52
All-Ireland Senior Football Championship 2020: Our writers’ and pundits’ predictions 08:00
Here is your handy guide to sport on television this week