Donncha O’Callaghan, one of the few left with experience of club rugby in 20th century 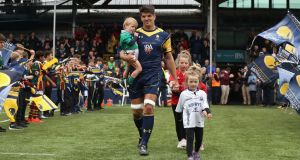 Every year around this time the list of players retiring from the game makes bittersweet reading. The names, whether famous or not, are a reminder that nothing lasts forever, that even the fiercest warriors have a finite shelf life. In the case of the Premiership, according to Damian Hopley of the English Rugby Players’ Association, the average life-span is seven to eight years. Those who last more than a decade can count themselves lucky.

This year’s crop of retirees in Europe has stirred some particularly strong emotions and rightly so. Worcester’s Donncha O’Callaghan was one of the few left with experience of club rugby in the 20th century. Bryan Habana, Juan Martín Hernández, Juan Martín Fernández Lobbe, Jamie Heaslip, Schalk Brits, Tom Croft, John Muldoon. in their differing ways all of them were inspirational figures who will be hugely missed.

All one can do is cling to the memories. In the mind’s eye a youthful Croft is sprinting unstoppably away at Twickenham to announce himself for Leicester in the 2007 Anglo-Welsh final and showing world-class gas in an England jersey to carve up France in Paris in 2012. At his best he had everything: pace, athleticism, bravery and modesty. When the good guys also happen to be great players it is a special combination.

The same can be said of Brits, who has single-handedly redefined what a hooker should be capable of. The South African won 10 Springbok caps but will be remembered primarily for the infectious joie de vivre he brought to the game. These things are not always measurable but would Saracens have been so successful for so long without such characters making the working lives of others so enjoyable?

Into this feelgood category also comes the 39-year-old O’Callaghan, not least on the famous occasion when he enticed 12 ducks into the Munster team-room with a trail of cornflakes. Beneath the surface, though, lurked an athlete constantly seeking to make the best of himself. “Talk to anyone at Worcester and they’ll tell you about the positive influence he has had and the hole he will leave behind, as a person as much as a rugby player,” Hopley says.

O’Callaghan, though, is one of the fortunate few, able to depart on his own terms, comforted by the heart-warming photo of his children in the jerseys he himself has worn down the years. Many do not enjoy that luxury, a subject Hopley found himself discussing with James Haskell last week. “We were talking about how few athletes there are who, to use James’s wonderful expression, get carried out of the ground on their shields when it’s all over,” Hopley says.

“Psychologically, that sets you up very differently for retirement from the guy who goes out the back door with half his leg hanging off, battling for his medical costs and insurance. It has an impact on your self-esteem which is probably the hardest thing to come to terms with when you hang up your boots and hand back the car keys.”

Those in the latter category such as Wasps’ Sam Jones, injured during a judo grappling session on England duty, also find themselves wrenched away from the people who understand them best. “When they asked Donncha at the weekend what he’d miss most he said the boys and the environment,” adds Hopley. “I think that’s the thing people struggle to understand. You belong and then suddenly you don’t belong. You know that day is coming but you want to keep it at arm’s length for as long as possible. We can’t all be Simon Shaw who played for 20 years.”

Everything is strictly relative, of course. Whatever the trials and tribulations of the retiring player they are as nothing compared with the numbness still afflicting the family of Ian Williams, the 27-year-old Doncaster prop who collapsed in training in February and tragically could not be resuscitated. It is also true, however, that the pro game grows ever more intense and the worrying injury stats recently revealed for the 2016-17 season have caused significant disquiet among players, not least the reported higher injury rates associated with artificial pitches.

Increasingly it is not so much the pitch itself as the transition – soft to hard, hard to soft – between different surfaces which is being blamed for certain injuries. “Talking to a number of England players they’re very anti artificial pitches, particularly around transition,” Hopley says. “You get a feeling we should probably be looking at one agreed surface for everyone to play on. All home teams aspire to a competitive advantage but maybe that should be about the crowd and the atmosphere, not the surface.”

Excessive contact during training sessions is the other key area being monitored. “Going round the clubs, particularly in a post-Lions season, it is clear the game’s demands are increasing,” says Hopley. “We just want to educate the players on the fragility of their careers and their expected span. We all recognise rugby is a very physical game but it’s a matter of how we can fine-tune it. I feel a bit like Alan Turing wrestling with the Enigma Code.” For the sake of future generations, let us pray someone cracks it soon.