Standalone off-licences among list of ‘essential’ retail services in Republic 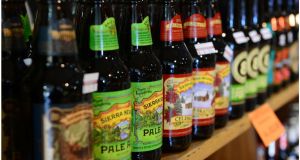 Last week the National Off-Licence Association told its members off-licences were acting as a ‘vital cog’ in the community. Photograph: Bryan O’Brien

The Northern Ireland Executive is expected to reverse its decision to close standalone off-licences during the coronavirus outbreak after the sector was deemed an “essential” retail service in the Republic.

The North’s justice minister, Naomi Long, raised the issue of standalone off-licences at an Executive meeting on Wednesday, and it is understood the review could take place as early as Thursday morning.

All but “essential” retail services have been closed in Northern Ireland in an attempt to contain the spread of the virus.

According to a list published by the Executive office on Tuesday, essential services include supermarkets, convenience stores and petrol stations. Off-licences were deemed “non-essential” and were instructed to close immediately.

Concerns had been raised in the industry that standalone off-licences were being unfairly disadvantaged because in-store off-licences could remain open, and could increase the number of people in supermarkets and other premises.

On Wednesday, the UK government added off-licences to its list of essential retailers, which means Northern Ireland is likely to follow suit.

On Tuesday, Taoiseach Leo Varadkar announced the closure of all non-essential retail stores in the Republic until April 19th.

The Government’s list of essential shops, which are permitted to stay open, includes “retail and wholesale sale of food, beverages and newspapers in non-specialised and specialised stores”.

The National Off-Licence Association, which represents more than 300 off-licences, said this category included its members and that stores would continue to trade as normal.

They also said some off-licences may choose to close of their own volition, but that this decision was up to each individual business.

Last week the National Off-Licence Association told its members off-licences were acting as a “vital cog” in the community during the coronavirus outbreak and should avoid being portrayed as seeking to profit from the public health crisis.

The advice, issued following media interest in sales on St Patrick’s Day, encouraged managers and owners to say trading had been good “due to a return to shopping locally” and that off-licences were “retailing responsibility in line with public health advice”.

A number of off-licences reported that sales had increased following the Government’s request to pubs and clubs to close 10 days ago, with some saying it was “like Christmas again”.

Other premises decided to close before St Patrick’s Day last week to protect staff and customers from the spread of the virus.

Garret Connolly, owner of Baggot Street Wines and Whiskey, opted to close when the Government announced restrictions on pubs and clubs because he believed there would be increased footfall in the shop.

Whelehan Wines also decided to close in a bid to “minimise social interaction as much as possible”.