Win over Toulouse settled some Leinster doubts for Kearney 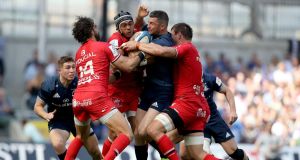 All is a little better in Leinster’s world. The close shave against Ulster in the quarter-finals did, Rob Kearney admits, cause concern within their ranks, but the pleasing manner of last Sunday’s semi-final win over Toulouse removed what he described as a sense of uncertainty.

“I think now we’re in a very good place,” said their multi-decorated fullback on Wednesday. “After the quarter-final there would have been an element of, not worry, but I think players and coaches would have said we’re not where we were last season.

“Round one of Europe was probably our best performance this season. In round two you lose away to Toulouse, and all of a sudden people think we’ve lost a little bit. Bath back to back were tough games. It’s tough to win over in the UK. Those Premiership teams are tough, physical teams.

“But, really, those sort of perceptions came into play after the quarter-final, and it was a combination of us not playing well but I think Ulster deserve huge, huge credit. They played really well that day.”

The one remaining hurdle in Leinster’s attempt to win a record fifth Champions Cup are Saracens, and England’s win over Ireland in Dublin last February is something of a reference point given, Kearney agreed, Saracens play like England.

“With Owen Farrell there we’ll have to have a little bit of a look at that English game in terms particularly of back field, how they manipulated us that day.”

Saracens place “a huge emphasis” on their kicking game, and Kearney is sure to be tested there after they earned such a rich dividend from their early aerial bombardment of Munster last Saturday.

“It’s a tricky one because David Strettle must have won four or five balls where he’s not making an effort to catch the ball. He just wants to break it. And if I’m going up to catch a ball and you’re going up to break it you’re going to win it every time. So there’s a huge element on winning those scraps, and Saracens won them all.

“You hear a lot about aerial battles throughout the season, but for me it’s only when you get into the big games, those semi-finals, finals and internationals, when teams kick more ball, and the aerial battle becomes a bigger contest.”

Asked what could Munster have done better, Kearney says: “There’s a few bits. I don’t want to give too much away, but Munster could certainly have dealt with it better.

“Yea,” he agreed, “they [Munster] didn’t escort a huge amount. Escorting has become a real problem in the game at the moment. It’s not being refereed and regardless of how much discussions you have with referees and touch judges when the ball is up in the air all 50,000 people in the stadium will do this,” he said, looking upwards.

“No one knows what’s going on down here,” he added. “So it is a bit of an issue and they don’t really want to manage it too much at the moment.”

Leinster and Ireland were, he said, “last to the party”, adding “we would consider ourselves a pretty disciplined team, so we’d always like to think that we’ll come out the right end of the penalty count. We’re sort of reluctant to push the boundary a little bit, but with the scale of the escorting now maybe we need to start.”

He is also far from alone in wishing to see the offside line officiated more stringently, especially by touch judges.

Although Leinster have earned themselves a bye from the quarter-finals of the Guinness Pro14 the weekend before the final in Newcastle, Kearney is likely to be one of many front-liners rested from Saturday’s excursion to Ulster.

“It’s always a tough one for the management to weigh up, and they probably would have gotten a bit more confidence after how the weekend just gone went”, and while it was different for an outside back, Kearney believes their Tuesday and Thursday training sessions can be tougher than games.

The welcome endgame to the season may further delay contract negotiations with the IRFU. Kearney is represented by his father, and is contracted until the end of the World Cup. And while there was “no rush” he wants to have it sorted before Japan, after which he would like to continue playing following what’s been a strong personal season.

“It’s moving, it’s going in the right direction,” said the 33-year-old. And while he has some business interests, he added: “I’m not ready to go into that just yet. I feel good, pretty good mentally, pretty good physically. I don’t see any reason why I shouldn’t [play on].”

Kearney was speaking in his capacity as chairman of Rugby Players Ireland, who have welcome three new members on to its executive board; Maura Quinn, chief executive of the Institute of Directors in Ireland, Irish Women’s XV captain, Ciara Griffin, Irish women’s 7s player Louise Galvin, and Irish men’s 7s player Greg O’Shea.

“I think it’s progress, isn’t it?” said Kearney. “We’ve got one player from each province. I think it’s just become really well diversified now, and the more we can continue to look after the welfare of the players the better, while also making Ireland a really good place to play rugby.

“Because that’s our ultimate goal, to make Ireland the best place in the world to play rugby, and to really enjoy it and get well looked after. So many things go with that, but that is the ultimate goal.”