Rhys Ruddock ruled out of Leinster’s visit to Ulster 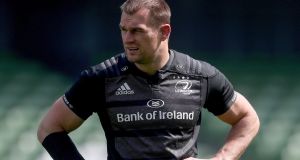 Rhys Ruddock: complained of feeling unwell after the captain’s run ahead of the Toulouse game and was promptly withdrawn from the semi-final team. Photograph: Oisin Keniry/Inpho

The issue which forced Rhys Ruddock to withdraw from Leinster’s Champions Cup win over Toulouse was a legacy of a blow he received in the quarter-final victory over Ulster at the Aviva Stadium on March 30th.

Ruddock complained of feeling unwell after the captain’s run ahead of the game against the French club and was promptly withdrawn from the semi-final by the Leinster medics, his place in the team going to Scott Fardy with Caelan Doris promoted to the bench.

Leinster’s scrum coach John Fogarty explained: “There was an original head knock against Ulster. And he wasn’t feeling quite right and the lads [medical staff] are unbelievably strict with all that stuff. He’s in that return to play protocol. We’ll see how he goes. He’s out for this week.”

Sean Cronin’s availability for the Champions Cup final against Saracens at St James Park on Saturday, May 11th will be clearer following the outcome on a scan on the calf injury that saw him limp out of the semi-final win over Toulouse.

Fogarty was noncommittal with regard to a prognosis: “He’s been assessed; we’ll see how it goes. He’s a pretty important person. He’s out for this week and, we’ve a prep week and then we play Saracens. It’s important that he gets back but we’re not quite sure yet.”

It’s unlikely James Tracy will be risked in the match against Ulster at the Kingspan Stadium on Saturday evening, thereby perhaps providing an opportunity for Bryan Byrne and Ronan Kelleher to look after the remit at hooker.

There is mixed news elsewhere on the injury front. Wing Adam Byrne is out for the remainder of the season having sustained a quad injury against the Glasgow Warriors.

Ross Molony (back) could return to training this week, while Andrew Porter (pectoral muscle) and Jamison Gibson-Park (hamstring) who weren’t considered for selection ahead of the Toulouse game will be further assessed ahead of the Ulster match.

Fogarty paid tribute to the diligence Johnny Sexton brought to bear in his rehabilitation to ensure that he was back to lead the province against Toulouse and the quality of his subsequent performance in the match.

“You know Sexto, when he’s back and he’s 100 per cent, it’s just an amazing thing to watch. He led us the whole week and was such a huge influence for us in the game as well.

“He had his bits to get fixed, got himself right and then goes out, trains during the week, plays and does a great job. So we’ll be hoping that other guys who aren’t quite there manage to get themselves back playing well and pitch up.

It was Sexton’s first game for his province in 2019 and in his absence Ross Byrne – likely to start in Belfast – has proved a very capable deputy, starting eight of his last nine appearances in a Leinster jersey including the Champions Cup pool wins against Toulouse and Wasps in January and the quarter-final triumph against Ulster in which he defied cramp to kick the match-winning penalty.

“He has always been there for us when we needed him. You have to admire his mindset. He runs the teams like Johnny when Johnny is not there. If Johnny is here, he [Ross] is adding to the conversations as well. He has really stood up this season for us.

“In the past if Johnny wasn’t there; we played against Toulouse in a semi-final and Johnny didn’t start and it was like ‘Jesus Christ’. There was an effect on the players, the playing group. If Johnny is not there, Ross is and he gives confidence to everyone, we know what game he will play. The forwards like playing with him.

“He manages the group really well during the week; very confident fella but such a solid person for us in our group. Getting to semi-finals, finals, winning competitions you have to have a squad and it is going to be massively tested.

“We are very lucky to have Ross in this squad. Like I said, when Johnny is not there, there is not this anxiety in the coaching or playing group. That’s what Ross brings mentally and in the way he plays the game. He is very, very capable.”