Vunipola: ‘intention was never to cause suffering’, but stops short of apologising 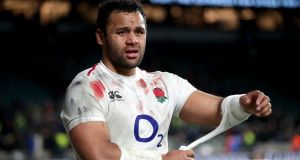 Billy Vunipola has been given a formal warning and reminded of his responsibilities by the English RFU. Photograph: PA

Billy Vunipola has been issued with a formal warning by the English Rugby Football Union for a homophobic comment made on his Instagram account last week.

Vunipola was summoned to talks by the RFU to discuss a post that read, ‘Man was made for woman to pro create that was the goal no?’. England’s No 8 liked a social media post by Australia full-back and fellow devout Christian Israel Folau, who stated that “hell awaits” for “homosexuals”.

An RFU statement read: “Following a meeting between the RFU and Billy Vunipola, the Saracens forward has been issued with a formal warning under RFU rule 5.12 for conduct prejudicial to the interests of the union or the game.” Vunipola has escaped a fine or ban from Twickenham, making him available for England’s four warm-up Tests ahead of this autumn’s World Cup.

The RFU statement continued: “The warning will be retained on his disciplinary record for a period of five years and may be taken into account in future disciplinary proceedings. During the meeting the player expressed genuine regret at his public comments and understood that he had caused hurt and offence as a result of his actions. He has been reminded of his responsibilities as an England player and as an ambassador for the game, which values inclusivity and respect.”

Saracens conducted their own internal investigation and, following lengthy discussions with Vunipola, a formal warning was issued, but the club also opted against imposing a fine or suspension. The English champions said he was guilty of a “serious error of judgement” and that by publicly sharing a view that is at odds with their values, he had contravened his contract.

In his own statement, Vunipola insisted his “intention was never to cause suffering”, but stopped short of offering an apology. Despite clarifying his position, the offending post remains visible on his Instagram account.

On Saturday the 26-year-old, whose mum is a Methodist minister, was booed during his appearance as a second-half replacement against Bristol, who also played gay anthem ‘It’s Raining Men’ on their PA system. Saracens director of rugby Mark McCall said “I’m sure there’s stuff going on in his head”, but will pick him for Saturday’s European semi-final against Munster at Allianz Park. Channel 4, meanwhile, have removed him as one of the faces for their Champions Cup coverage.

Folau has been told by Rugby Australia that he is in breach of its code of conduct and will have his four-year contract terminated, subject to the 48-hour window for him to appeal.

1 Owen Doyle: Creeping professionalism of schools rugby a threat to the game
2 GAA officials and referees brace themselves as new rules kick in
3 Niall Quinn happy to step into the breach at FAI
4 Caroline Wozniacki’s career ends with defeat to Ons Jabeur
5 Wolves left to rue profligacy as Liverpool roll on
Real news has value SUBSCRIBE