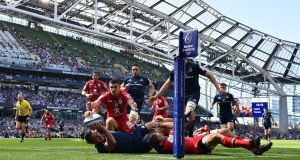 Under a sky of blue, and amid a sea of blue, Leinster saw off the dangerous and spirited challenge of Toulouse in a manner that delighted their supporters. Three tries to nil left no room for argument.

The conditions seemed tailor-made for Toulouse, a warm spring day with the sun on their backs, but it was Leinster, with the excellent Luke McGrath and Johnny Sexton sharp in their decision making and execution, who set and maintained a tempo which was just too hot for the rumbling French pack.

Looking for quick taps, taking little time over their lineouts and most of all generating rapid-fire recycling thanks in large measure to the quality of the footwork close to the line in seeking soft shoulders or space, Leinster didn’t allow Toulouse time to catch their breath.

In this Jack Conan and Garry Ringrose were superb, but they weren’t alone, with James Ryan and Seán O’Brien putting in huge shifts on both sides of the ball, and Robbie Henshaw added oomph alongside Ringrose, who also put in 15 tackles, as did the irrepressible James Lowe, who set the party rolling.

Toulouse had their spells too, and the footwork of Antoine Dupont, Cheslin Kolbe and co kept the Leinster defenders close together and focused to limit the damage. But Toulouse’s trio of southern hemisphere forwards, 32-year-old Charlie Faumuina along with Joe Tekori and Jerome Kaino, their two 35-year-olds in the backrow were sucking diesel from the first quarter.

In light of being bullied in the contact area by Leinster at the RDS in January, Toulouse bulked up their pack - while the withdrawal of an unwell Rhys Ruddock also meant Leinster accommodated a third lock, Scott Fardy, at flanker.

Initially, it was Toulouse’s amalgam of powerful straight carries - Faumuina making one huge rumble - and the dancing feet of Cheslin Kolbe which tested the Leinster defence after Johnny Sexton had been penalised for not releasing with Peato Mauvaka in the jackal.

Their reward was a Thomas Ramos penalty when Wayne Barnes adjudged James Ryan hadn’t rolled away sufficiently, even though he was clear of the ball. At least Barnes was consistent when penalising Faumuina for same, and Sexton drew the sides level with his first place kick of 2019 for Leinster. Both scrum-halves would have been happy to see Barnes ensure a clearer pathway at the base.

Off a scrum inside halfway, Luke McGrath wrapped Sexton and hit Rob Kearney. Conan and Ringrose both used footwork late to the line to keep the momentum going, before good hands by Sexton and Cian Healy gave Sean Cronin a carry, and then O’Brien took McGrath’s blindside pass off a rapid recycle to beat his man with good footwork as well, although James Lowe still had to withstand two tackles for a fine finish in the corner.

Sexton landed a wonderful touchline conversion, and soon nailed a 50 metre penalty to touch, but Devin Toner couldn’t take in Cronin’s throw. No worries. After a cheekily tapped 22 metre restart by Lowe, again keeping the tempo high, Henshaw followed up his own touch finder by blocking down a Ramos kick - the fullback took an age - from Yoann Huget’s quick throw.

From the resulting scrum, Richie Gray stupidly played the ball on the deck, which was spotted after recourse to the TMO. Like the child sent to the corner of the room, albeit a rather tall one, he sheepishly made way for ten minutes.

Leinster went to the corner, Cronin’s throw hit Toner, and off a controlled, secondary drive, Fardy plunged over the line. But this Toulouse are made of resilient stuff, and after generating their own quick-fire phased attack, Henshaw was also rightly binned for a deliberate knock on, albeit it was surprising to see Toulouse settle for another three-pointer from under the posts.

Leinster lost Cronin, their leading try scorer in the tournament this season, and who’d had a barnstorming first half hour. With Gray back on the pitch, Sexton went for a long range penalty which was just wide.

Then, though the clock was up, he nailed another huge touch finder with a scrum penalty from his own half. Leinster’s maul rumbled again, but after James Lowe rounded the posts from Henshaw’s pass, the ‘try’ was ruled out for Conan blocking Sofiane Guitoune.

Toulouse kicked two penalties up the line but, six minutes after the ‘40’ was up, Leinster negated the maul to see out the half 17-6 ahead.

Job half done, but on the resumption Ramos made it 17-9 with a 45 metre penalty for Ringrose’s high tackle on Dupont. In any case, Sexton’s sweet grubber, chased hard by Jordan Larmour, forced Kolbe to concede an attacking throw. In between two lineout drives, Toulouse replaced half their pack, surprisingly captain Kaino being one of them along with Faumuina and Tekori.

Save for one long pass by Sexton to Larmour, Leinster kept rumbling close in before Fardy crashed through the tackles of Pita Ahki and Rynhardt Elstadt for his second try. Sexton’s touchline conversion, from the right and into the sun, was ridiculous.

The introduction of Romain Ntamack and Maxime Médard, with Dupont reverting to scrumhalf, gave Toulouse’s attack more shape. With a penalty advantage, Médard kicked into an empty ingoal and looked sure to score but Ringrose’s superb covering denied him. Instead, another Ramos penalty made it a two score game.

Leinster’s strong defence revived them, forcing a spillage from Piula Faasalele, and after O’Brien made a clean break off Sexton’s superb pass, Faasalele was pinged for a high hit on James Tracy. A limping Sexton landed his fifth and final kick.

Entering the last ten minutes, Leinster defiantly withstood some pummeling on their try line from two mauls before Larmour, with a huge play, picked off a blindside pass by Dupont. Tracey’s ankle-clinging tackle prevented Huget from escaping, before the winger illegally played the ball on the deck.

That was pretty much that.

Leinster went to the corner after yet more wonderful footwork by Ringrose, and Lowe was only denied a second try by the double tackle of Guillaume Marchand and Guitoune before Ross Byrne tapped over the penalty which had the final say.

The Champions were worthy winners.