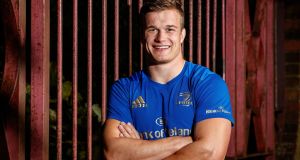 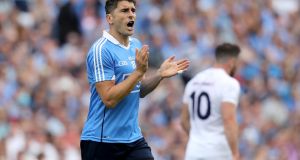 As a result of a chance conversation and shared circumstances, the professional rugby player and amateur Gaelic footballer kept in touch by text, providing updates on progress as each began the rehabilitation process.

Van der Flier provided more detail. “We actually got surgery the same day. Yeah, I didn’t even know that he was in. Ray Moran, who did the surgery, came in and said, ‘I just did Bernard’s there, and you can be buddies [in terms of the rehab].’ It was cool to have someone to compare to along the way.

“We just texted every few weeks, I wouldn’t know him very well. It was just ‘how are you getting on? How’s it [the knee] been?’ You’d be like, ‘I am back doing squats. How are you doing?’‘Grand. It’s sore doing this but I find that icing is working.’ That kind of thing.”

Brogan returned to play 23 weeks after his surgery, coming on as a substitute in Dublin’s Super 8s victory over Roscommon, a staggering achievement and one with which van der Flier – who was back in seven months, which is no mean feat – was impressed.

“Yeah, it was incredible. He was trying to get back for the end of a season and I suppose it would have been silly for me to rush back with a full season ahead. I was incredibly impressed [with Brogan] and he’s been doing very well for his club as well by all accounts. He beat me by a month and a half – 1-0 Bernard.

“When I first got injured they said nine months was the standard recovery time, which would have taken me to mid-November. I wanted to come back for the first weekend of Europe. I knew I wouldn’t get straight back into the team when I hadn’t played before then.

“So the Dragons [match in September] became the target around June. I remember I wanted to run at the end of May and they were saying ‘no you’re not running until July’. I saw it as my job to be ready to play and push them to get me ready to play, but Ferghal [Kerin, Leinster physio] insisted that I wasn’t going to be allowed to do anything until I was ready.”

Tom Daly and Jordi Murphy had come back from similar injuries, so the Leinster medical team had recent first-hand knowledge of the ballpark timeframe required and were careful not to allow van der Flier push too hard, too quickly.

Having initially lost a little muscle mass and weight due to inactivity, van der Flier is back to the 104 kilos he was prior to surgery, but feels stronger and fresher now. “I’ve done about seven months of gym, three or four times a week, so I’m probably the strongest I’ve ever been.

It was a very tough game.  If you hadn’t watched the game, you wouldn’t have realised it was so brutally tough

“I had a couple of injuries you might pick up along the way. You might have a sore shoulder now and then, or something is bruised or even a bit sensitive. One of my fingers used to get a bit sore; silly things like that, but they’d never stop you playing. I feel perfect now because you’ve had six or seven months of not having to tackle or do any of that sort of stuff.”

He’s confirmed that rude health in outings against the Dragons and Edinburgh in the last two matches, the latter game a rigorous workout against a very physical team.

“It was a very tough game. The scoreline didn’t reflect the match. If you hadn’t watched the game, you wouldn’t have realised it was so brutally tough. A lot of pick and goes, a lot for forward work, rucks to be hit, tackles to be made. I was a bit sore on Sunday morning but not bad now.”

The imminent return of Seán O’Brien means that competition for places in the Leinster backrow is going to be cranked up another notch, and van der Flier is grateful that he’s got some game time under his belt.

“It’ll be great to have Seán back and Dan [Leavy] back as well. It’s getting very tough now again. It’s only good for pushing everyone on; everyone has to be playing their best now to be playing.”