Coach happy with Connacht win ‘but in terms of bigger picture, it’s a thing of the past now’ 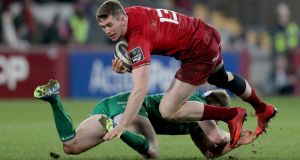 Munster coach Johann van Graan singled out a couple of players returning from injury with centre Chris Farrell and openside flanker and man-of-the-match Conor Oliver receiving special praise in the wake of the province’s 39-13 victory over Connacht at Thomond Park.

Farrell, who in a typically muscular performance played a pivotal role in Munster’s first try, returned for the first time since damaging his knee in Ireland’s win over Argentina in the November Test series while Oliver had been out of commission after undergoing shoulder surgery in pre-season.

Van Graan explained: “It’s the first time that I have worked with Chris [Farrell] in training in this week. He’s a fantastic rugby player and a fantastic prospect. I think his future is very bright. He gave us a lot of momentum but also once he went into contact he looked for his offloading game and that is something we will hopefully explore in the future. He brings a bit of calm and he’s big so it looks nice to have him there at 13.”

Oliver led his side’s tackle count (16) during the match and also provided an important link when Munster finally managed to loosen the shackles in the second half of the match. “I thought he was exceptional,” added van Graan. “On the back of Chris Cloete, we’ve had some brilliant performances at openside. I’m very pleased for him to come back after that injury and play 80 minutes.

“One of his biggest threats is his poach threat. He didn’t really go for the ball because we had to adapt to the breakdown, but his carrying ability and line-speed [was excellent].”

The Munster players have been given a couple days off to recuperate before reconvening on Tuesday to prepare for next Sunday’s Champions Cup match against Racing 92 in Paris.

Despite Munster scoring five tries, van Graan is adamant that the win over Connacht will have little material benefit in appraising their next assignment. “This game [Connacht] in terms of the bigger picture, it’s a thing of the past now; Europe’s a totally different competition. We’re playing against a side [Racing 92] that’s got a different complexity about them.

“You just have to look at the game earlier in the season. That was zero-all at half-time. They [Racing] play the game a lot different to what we faced over the past few weeks so I don’t think this game will have any bearing on next Sunday at all.

“If you look at the context of our pool, Racing are four points behind us, they will also want to stay in this competition. If we beat them I believe we will get through the pool. If we don’t we will have to get back here to Thomond Park the following week. So to win in France – we drew there [Castres] earlier in the season – against top-quality opposition you will need an 80-minute performance with all 23 of your players.”

Rory McIlroy hoping course-and-distance form will stand to him at Harding Park 20:11
Gareth Bale left out of Real Madrid squad to face Manchester City 19:41
Babar Azam shines between showers as Pakistan make solid start in first Test 19:31
Arsenal announce plans for 55 redundancies due to effect of coronavirus 18:24
Shane Lowry knows back-to-back Major hopes down to his putting 18:23
Here is your handy guide to sport on television this week