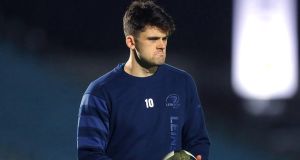 In recent times Leinster have had three pairs of brothers on their books, but whereas Ed and Bryan Byrne, along with Rob and Dave Kearney, could be accommodated in the same team, the sibling rivalry between Ross and Harry Byrne has been accentuated by them competing for the same spot.

Now, for the first time in the Heineken Champions Cup, the younger brother, 21-year-old Harry, has been prompted ahead of Ross (25), in one of eight changes to the starting XV from the win in Montpellier last weekend for Saturday’s game against Northampton at the RDS (kick-off 1pm).

The elder Byrne made it 10 wins from his 10 starts in the competition last Saturday, when his younger brother came on for the last 18 minutes in making his European debut. Now they swap positions.

“They’re very competitive, so I think they enjoy the competition and the rivalry,” said Leo Cullen after announcing his side on Friday. “It’s great to see. I think you would have to ask their parents maybe. Sometimes I feel like ringing them up and asking them.

“They’re your classic competitive ‘10s’ really. They’ve both been great, two very important members of the squad. It’s a great opportunity for Harry coming in for his first start in Europe, and Ross has been outstanding for us over the last few seasons as well. So hopefully he’ll give good impact from the bench at whatever stage that is.”

“Ryan is clearly very, very athletic. Our front five benched last week so they have that cohesion, a decent week in training together, hence they have changed en masse this week. The frontrow as well,” said Cullen.

“It’s a good dynamic lock partnership, a combined age of around 25 years younger than the one last week with Dev and Fards,” he noted with a chuckle. “We’ve invested in that depth for this intense block of games, it will be massive for us, giving guys these opportunities.”

As the competition lurches on amid three of the scheduled dozen games in round two being cancelled, Cullen admitted: “It’s a real reminder for us all, full credit to all our medics who have done so much work, with all the provinces and the IRFU, we haven’t had any games off yet because we have taken it so seriously.

“We know it is a very real threat to all teams. We can only control so much and it is difficult across the board in all industries, not just sport. Everyone is doing their best to make sure games go ahead as safely as possible. There are things out of our control. We need to get our bits right and the guys have prepared accordingly.”

On a positive note, Cullen anticipated that Tadhg Furlong will return to some scrummaging “potentially next week or certainly the week after. He’s not a million miles away now.”

Northampton have made eight changes. With Dan Biggar unavailable through injury, the four-times capped England fullback George Furbank moves into the ‘10’ jersey for only the second time and he is partnered by Tom James – who makes his European debut from scrumhalf. The 22-year-old winger Ryan Olowofela makes his first Heineken Champions Cup start.