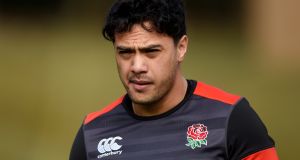 Referee Andrew Jackson’s microphone picked up Shillcock complaining that he had twice been the target of an alleged “homophobic slur” made by Solomona during Sale’s 58-25 Premiership win over Worcester last month.

Solomona, 24, contested the charge but was found guilty by the RFU’s independent panel.

“The panel found that the player used language that was verbally abusive on more than one occasion in quick succession,” panel chair Samantha Hillas said in a statement.

“The comments were offensive and have no place on the rugby field. However, the panel accepted that they were said in the heat of the moment rather than premeditated.

“For these reasons, the panel deemed it was a low end entry point which carries a six week suspension as a starting point. The player did not accept the charge but all other mitigating features were present. The panel therefore reduced the sanction to four weeks.”

Solomona is banned until May 8th, which means he will not play again this season unless Sale reach the Premiership playoffs.

France centre Mathieu Bastareaud was suspended for three weeks in January for making homophobic comments in a Champions Cup match for Toulon, and went on to miss the start of the Six Nations campaign.