Scarlets time peak to perfection to leave Glasgow in their wake

Defending champions back in Pro 14 final after Scotstoun victory 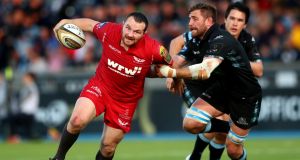 Scarlets’ Ken Owens is tackled by Callum Gibbins of Glasgow during the Guinness Pro 14 semi-final at Scotstoun. Photograph: James Crombie/Inpho

Scarlets stormed into the Guinness Pro 14 final after dismantling Glasgow 28-13 at Scotstoun.

The Warriors have led the way on the domestic front all season, but they had no answers to the power and pace of the reigning champions, who remain on course for a successful defence of their title in Dublin next week.

The warning signs had been coming in recent weeks for Glasgow who have slipped away from the heights they hit earlier in the season, but Scarlets blitzed them early on in a devastating show of strength as the hosts were turned over on home soil for the first time all campaign.

Tries from Rhys Patchell, Gareth Davies, Rob Evans and Ken Owens – Patchell converting each time – did the damage as the Welsh visitors showed their prowess.

There was an electric atmosphere before kick-off thanks to a capacity crowd of 10,000, but that was nothing compared to the first 10 minutes in what was a breathless start.

It was Scarlets who raced out of the blocks, playing with a real zip as they threw the ball about in the late evening sun and Glasgow had barely had a touch before they were behind.

After pinning the hosts inside their own 22, it was Patchell who brushed off a weak tackle from Nick Grigg to dive over inside the first five minutes.

The visitors lost Scotland skipper John Barclay to injury not long after and Finn Russell reduced the deficit to four points with a penalty, but again the Scotstoun faithful were stunned into silence after Davies was sent through under the sticks after a fine run by Scott Williams.

At 14-3, the game seemed to be slipping out of the Warriors’ grasp despite them having a healthy share of possession in the opening half hour. In truth they did not threaten the Scarlets line.

Scarlets continued to zip the ball around in attack and a weak Glasgow defence again conspired to let them waltz down the left wing before the ball found its way to Evans on the inside and the prop sauntered in to leave the hosts with a huge task on their hands in the second half.

Glasgow almost pulled a try back on the brink of half-time as they powered over the line, but referee John Lacey ruled the ball had been held up to mark a huge missed opportunity.

Despite their best intentions after the break, the Warriors were again forced onto the back foot with Patchell dictating play, and Grigg was sent to the sin bin before Owens scored from the resulting play to all-but seal the win with still half an hour to play.

Jonny Gray pulled five points back and could have had another try but for the TMO, and Grigg rolled over before Pete Horne’s missed conversion appeared to rule out any slim chance of a comeback and proved to be scant consolation for a painful defeat.