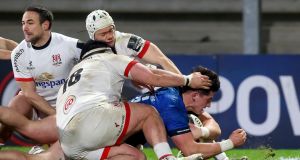 Dan Sheehan forces his way over for a try against Ulster. Photograph: James Crombie/Inpho

An anti-climactic occasion to seal the anti-climactic finale to the Conference campaigns. Leinster sealed their place in the final on March 27th, where they’ll assuredly face Munster, after this bonus point win over their nearest challengers and neighbours.

A fast-paced opening half-hour had defied another fanless affair, with Ulster scorching into a 12-3 lead, before Leinster responded like true champions to move 17-12 ahead, and all while Frank Murphy brandished three yellow cards, two of them to the visitors.

Whereupon the contest was effectively decided when Murphy, largely at the behest of an overtly influential Olly Hodges as TMO, decided to red card the Ulster prop Andrew Warwick for leading with his left elbow into Ed Byrne in a carry.

Murphy was of a mind to brandish what would already have been his fourth yellow card of the game, but Hodges encouraged him to continually re-watch the incident. In Warwick’s defence, these things always look worse in slow motion, there was little or no force in his action and he wasn’t helped by Byrne going into contact too high himself.

With Stuart McCloskey having been binned moments beforehand, Leinster swiftly scored third try against 13 men, giving themselves the second period to seal their place in the final with one more try. They did so by the hour.

In truth, Leinster’s well-oiled efficiency is such that would have won without Warwick’s red card. Despite missing 15 frontline internationals in the Irish squad, they hardly made a mistake from beginning to end.

Their pack were uber-efficient at scrum, lineout, ruck and maul time, and true to type they were utterly ruthless inside the opposition 22.

Scott Penny again caught the eye with his low centre of gravity and all-round skills and Luke McGrath remains the heartbeat of the team. For Ulster, ultimately there few redeeming features although after a year out of the game, Robert Baloucoune scarcely looked like he’d been away at all, Nick Timoney and Michael Lowry also had big games.

There were five yellow cards as well as a red, and the penalty count was 16-10 against Ulster, which dominated the game. In fairness to Murphy player safety, especially around the head, is paramount and as a former scrumhalf, his fastidious demand that tacklers roll away sure ensures a high tempo. But he sure has a tendency to dominate games.

There was actually something resembling an atmosphere before the kick-off as the two squads went through their animated warm-ups, and Fatboy Slim’s Right Here Right Now seemed like an apt track for Ulster on the night.

The two teams returned to Stand Up for the Ulstermen, whereupon there was silence as they lined up for the kick-off. There’s no getting used to this.

Leinster were quicker into their stride as Ross Byrne opened the scoring before Devin Toner was binned on review for a high arm on a dipping Michael Lowry. He wasn’t penalised but a review led to a yellow card for the veteran.

Ulster went for the jugular, opting to take on the seven-man pack with successive mauls before Marcell Coetzee plunged through the tackles of Byrne and Rory O’Loughlin for his ninth Pro14 try of the season. Cooney converted.

Ulster then maximised their numerical advantage by using the full width of the pitch through multiple, high tempo phases. Jacob Stockdale, who looked sharp, made inroads on the left, and Lowry through the middle, before Madigan took Kieran Treadwell’s return offload and McCloskey also worked the ball out of the tackle one-handed.

With a two-on-one, John Andrew timed his pass perfectly to give Baloucoune an opening out wide, needing all his strength to take the tackles of Max O’Reilly and Dave Kearney, and all of his 6’ 4” to touchdown in the corner on his first start in over a year after a serious hamstring injury.

Cooney’s conversion hit the post but to compound matters for Leinster, on review Jimmy O’Brien was binned for a high, head-on-head hit on Madigan earlier in the move.

Hence, it was a surprise that against 13 men, Cooney not once, but twice opted for box kicks. On Toner’s return, Leinster responded with a huge scrum and twice worked over the Ulster defence before opting for a couple of tap pens under the posts. There was an equal inevitability about the try when Michael Bent powered over.

Better followed from the champions after Jimmy O’Brien won a high kick by Byrne and transferred sharply to Cian Kelleher. When the ball was worked left, Max O’Reilly dummied and sliced open the Ulster defence before offloading to Luke McGrath on his inside.

McCloskey was binned for illegally preventing the recycle, and had to be binned. It was only a stay of execution as, off more of the same, Josh van der Flier scored.

The red card for Warwick, who had replaced Eric O’Sullivan early on, meant game over, and it had been a cracking one too.

Coetzee, seemingly hamstrung, was replaced by the returning O’Sullivan and against 13 men, Leinster went through the gears. O’Brien turned down a try-scoring assist by going for the line when superbly held up by Stockdale but from the recycle, and umpteenth penalty advantage, Ed Byrne powered over and Byrne converted.

A strong carry by James Hume nearly earned Ulster a riposte but they walked off shaken and 24-12 behind.

All the on-field noise seemed to be coming from the men in blue before the home side briefly came alive 10 minutes into the second-half when Baloucoune steamed onto a skip pass by Cooney to veer inside Ross Byrne to skate over the line.

Cue the Murphy and Hodges show, as they deemed McCloskey’s decoy run which drew a tackle from Ruddock constituted obstruction.

Instead, after a triple substitution which saw Madigan hobble off and Lowry move to outhalf, and a procession of penalties, Leinster pounded the Ulster line from three tap penalties.

Ulster’s resistance was fierce but futile, as Ruddock muscled over for the fourth try before the hour, Leinster’s 13th attacking bonus point in 14 games.

The home side prolonged assault on the Leinster line amid another procession of penalties, and a yellow card for Ruddock, led to Timoney squirming over.

There was still time for Murphy to bin Ulster’s academy lock Cormac Izuchukwu, who had been carrying impressively, and Dan Sheehan to spring off a lineout maul for their fifth try.

By then the contest had long become more than a little farcical.

Graham Burke’s strike from halfway caps Shamrock Rovers’ fine night out 22:08
Lions squad set to have a greater spread than four years ago 22:00
Warren Gatland hopeful that Lions itinerary will be finalised this week 22:00
Blackmore back among the winners at Fairyhouse 22:00
Elite athletes still required to undergo 10-day mandatory quarantine 20:32
Here is your handy guide to sport on television this week