The interpros give players a chance to prove the coaches wrong

For Munster to match expectations, the generational shift may need to be accelerated 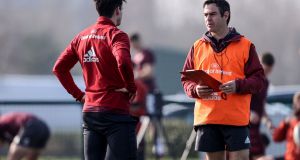 “There’s a huge amount of responsibility that comes with representing both Munster and Ireland,” he said of the two year extension, “and I understand how much pressure there is to deliver silverware.”

O’Mahony is 31. If his career ended today the solitary Munster medal from 2011, when they caught Leinster cold at Thomond Park in the Celtic League final, would not get a mention. Nor would the string of semi-final defeats. He would be remembered for squaring up to Wallabies as a 21 year old, and for leading Munster, Ireland and the Lions in the most unforgiving environments, and of course he would be feted for his acrobatics to help thwart the All Blacks in 2018.

But the pressure O’Mahony welcomes before his new deal expires in August 2023 demands tangible success from Munster under Johann van Graan. Interestingly, David Nucifora has drawn a contractual line in the sand for most players in that summer before the next Rugby World Cup. Every penny earned thereafter will be performance related.

Not a stone is being left unturned to get Pro14 and European trophies into O’Mahony’s hands. RG Snyman is running again while fellow Springbok Damien de Allende has already earned his lucrative salary. Graham Rowntree is the coach every Munster pack craves and the game has never seen a more balletic ‘first five’ than their attack coach Stephen Larkham.

A far more valuable return than the investment in foreign expertise can yield is the Munster academy bearing fruit. The senior squad possesses four bonafide outhalves, with Jack Crowley flashing his exceptional skills during last week’s victory over Ulster A in Donnybrook.

Ronan O’Gara already attempted to lure Crowley to La Rochelle, almost as punishment for Munster keeping their next wave of talent - including Kenyon Knox, Thomas Ahern and powerful winger Conor Phillips - under wraps until next season. The generous presumption is that these players are not ready; that the tight-five tyros are unable to overpower Billy Holland and Stephen Archer at training in UL.

Passing of the torch

But a generational passing of the torch is happening. On Friday night, Craig Casey will draw focus as the newly minted Ireland scrumhalf is measured against Caolan Blade’s snappy skillset. Gavin Coombes will showcase the fundamentals of number eight play against the equally physical, if occasionally rudderless Paul Boyle.

Such comparing and contrasting floods the screen over this interprovincial weekend as all four provinces unleash the best players at their disposal.

Ben Healy must show why he arrived before Crowley just as Joey Carbery glides back into the public consciousness.

Imagine what Jack Carty makes of the outhalf talk after being rung out to dry by Andy Farrell since Japan 2019. Carty’s engineering of Leinster’s only defeat this season shows the Connacht 10 still has plenty to offer Irish rugby but hope has been revived that a fit Carbery will blow everybody out of the water. Including the 35-year-old national captain - Johnny Sexton.

For Munster to scale the peaks they expect of themselves, the generational shift may need to be accelerated. They will only be on track to gather trophies when Knox and Roman Salanoa develop a tighthead hierarchy similar to Tadhg Furlong and Andrew Porter or when Jack O’Sullivan and Josh Hodnett begin to squeeze O’Mahony and CJ Stander out of the backrow.

Only then will Munster possess the necessary depth to stitch a third star over their crest.

Something has to give at outhalf. That much is plain to see. Evidently, four provinces are not enough to cope with a specific position being so rich with potential. At least some common sense is being employed. For example, Paddy Patterson was recently rerouted from Leinster to Munster in search of minutes at scrumhalf. The unscientific criss-crossing of provinces will continue but perhaps a trade mechanism can be introduced so everyone feels like genuine competitors and not just servants to the Team Of Us marketing slogan.

Leinster are so obviously sick of the puppeteering system. Make the divvy of unused talent competitive and provincial squads will benefit in the long term.

Homing in on Munster versus Connacht, the nine point gap between them gives an eliminator feel to the tie. But which line-up is better, in that, what players would each coach prefer to possess?

Munster boast fractionally more fire power because Andrew Conway reappears after zero minutes for Ireland in the Six Nations. Same goes for Chris Farrell and Shane Daly, although Bundee Aki’s frustration is guaranteed to manifest as a raging bull.

Connacht shimmy down the M18 with a superior pack of forwards. Munster will dispute this but the frontrow of Denis Buckley, Dave Heffernan and Finlay Bealham is more aligned with the Ireland camp. Also, Ultan Dillane and Gavin Thornbury appear as a superior locking partnership when compared to Holland and Fineen Wycherley. Coombes should ensure the Munster backrow tips the scales in their favour, but Conor Oliver is the Connacht openside because Van Graan preferred to keep Chris Cloete.

The interpros give players a chance to prove the coaches wrong.

The home side’s stacked bench will probably decide a close affair. Carbery will probably dispel all debates and worries of the past two years and while signs of progress elsewhere are real, O’Mahony needs to release the pressure valve around perennial silverware chatter. Failure to do so before 2023 will become an unavoidable part of his legacy.