In 15-year trophy drought, no team has proven more of a bugbear than Leinster 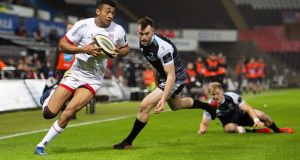 Ulster’s Robert Baloucoune will be starting his first game in over a year. File photograph: Inpho

Ulster’s Pro14 season reaches a familiar point of no return on Saturday evening, although they are hardly alone in yet again finding the three-in-a-row champions their main stumbling block in a long-coveted pursuit of a trophy.

The tournament organisers having decreed that the conference winners will progress straight to the final, shoehorned into the calendar a week after the Six Nations conclusion so as to accommodate the Rainbow Cup, accordingly Ulster are in must-win territory.

Cruelly denied Rob Lyttle’s apparent bonus-point try in the 79th-minute against the Ospreys last weekend, and so six points adrift, realistically Ulster probably need a bonus-point win while denying Leinster one to have any chance of overhauling them in the final two rounds.

Indeed, such has been Leinster’s remorseless accumulation of wins and tries that the champions could mathematically seal their final place tonight with a win and a 13th attacking bonus point in 14 matches.

Leinster, who hold a 31-8 win-loss record against Ulster in this competition, with two matches drawn, have convincingly won the last four meetings. However, coming in the midst of the Six Nations, both sides are much changed since their last meeting in January and, for that matter, last season’s final in September. Furthermore, those four wins have all come in Dublin since Ulster beat them here two seasons ago.

There’s no doubt that, as usual, Leinster have been harder hit by international absentees, with 15 players retained in this week’s Irish camp, whereas Ulster are only denied Rob Herring, Iain Henderson and Billy Burns.

Tom O’Toole and, once again, Stuart McCloskey have been released by the Irish management, so O’Toole’s recall is one of four changes made by Dan McFarland. With Robert Baloucoune starting his first game in over a year, and Eric O’Sullivan and the talismanic Marcell Coetzee also restored, and with Jacob Stockdale making his second start since recovering from the knee injury which has thus far ruled him out of the Six Nations, o n balance Ulster look stronger outfit compared to a week ago.

Admittedly with Ed Byrne, Rhys Ruddock and Ross Byrne (his brother Harry was ruled out) all starting after being released, as well as Josh van der Flier, the same could be said of Leinster, as Leo Cullen also recalls Max O’Reilly and James Tracy to a team that still features 11 full internationals (Ulster have seven). Both benches also appear to have more oomph too with only Coetzee, Alby Mathewson and Scott Fardy non-Irish qualified of the 46 players on duty.

The backrow battle alone will be intriguing, with Ruddock and Van der Flier additionally motivated by the desire to remind the watching Andy Farrell of their worth after being left out of the 23 in Rome, while the in-form Nick Timoney and Jordi Murphy will be mustard keen against their old team-mates.

Then there’s the contrasting match-up at number eight between the Bulls-bound Coetzee, 29-years-old, 6’ 4”, 116kg and capped 30 times by the Springboks, against Scott Penny, 21, 6’ 0”, 102kg and uncapped. This also features the two sides’ leading try scorers in the Pro14 this season – Coetzee has eight tries and Penny’s leg-pumping brace last week took his tally to nine in just eight outings.

Similarly, the match-up between John Cooney and Luke McGrath at scrumhalf should have a certain edge to it, and ditto Ian Madigan and Byrne at ‘10’.

Leinster’s win over Glasgow last week, with the bonus-point secured by half-time, was yet another reminder that no matter how many changes to the starting XV, this supremely well-drilled, well-oiled machine just keeps on motoring. McGrath’s exclusion from the Irish camp has been a blessing for Leinster, for in many ways he has been the heartbeat of this team.

Yet the odds on Ulster have trimmed from six- to three-point underdogs following the team announcements and at face value there doesn’t appear to be much between the sides. Certainly with Baloucoune and Stockdale back in harness either side of Michael Lowry, and match winners like Coetzee and Cooney, they look every bit as potent.

Ulster also go into this game on the back of 17 consecutive Pro14 wins at home. What’s more, Leinster have lost on four of their last five visits here since May 2014.

In Ulster’s 15-year trophy drought, no team has proven more of a bugbear than Leinster, who have beaten them in three finals and two semi-finals in the last decade. So, even if it doesn’t alter the make-up of the final, Ulster’s need is certainly the greater.

Graham Burke’s strike from halfway caps Shamrock Rovers’ fine night out 22:08
Lions squad set to have a greater spread than four years ago 22:00
Warren Gatland hopeful that Lions itinerary will be finalised this week 22:00
Blackmore back among the winners at Fairyhouse 22:00
Elite athletes still required to undergo 10-day mandatory quarantine 20:32
Here is your handy guide to sport on television this week