Andy Farrell’s side face a must-win in Rome, France’s clash with Scotland is postponed 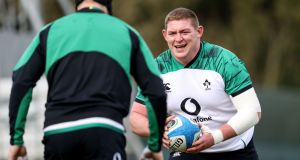 The Six Nations resumes on Saturday after a fallow weekend, with the Championship picture starting to take shape as we head into the third round of fixtures.

Unfortunately for Ireland, their challenge is all but over already. Opening defeats to Wales and France have left him with a mountain to climb.

This weekend they travel to take on Italy in Rome. The Azzurri are on a lengthy losing run in the tournament but Ireland will be very wary of their beleaguered hosts.

Anything other than a comprehensive victory will be seen as a disappointment for Andy Farrell’s side, while a defeat could make the prospect of a Wooden Spoon campaign a sobering possibility.

But this is also a chance to get back on the horse after a slow start, and build confidence ahead of final round fixtures against Scotland and England.

Scotland’s visit to France however has been postponed due to a Covid-19 outbreak in the French camp, leading to concerns over the future of the tournament.

Here is everything you need to know,

Round three of the 2021 Six Nations Championship, including Ireland’s trip to play Italy in Rome.

Ireland are up first this weekend, with a 2.15pm kick-off on Saturday.

What are the fixtures and results?

Ireland’s clash with the Azzurri will be shown on Virgin Media One (coverage starts 1pm), with ITV showing it in the UK (1.30pm). You can also follow it via the Irish Times liveblog from around 1.45pm on Saturday afternoon.

Wales against England will be shown on Virgin Media One, BBC One, and again you can keep track of the action via our liveblog.

How is the table looking?

Scotland’s trip to France is scrapped

Sunday’s clash between Scotland and France in Paris was postponed on Thursday following a further Covid-19 case in the French camp, which meant their entire squad was forced into isolation.

The postponement puts the future of the tournament in doubt with no date set for the rescheduled fixture to be played.

If the fixture is moved back a week to the tournament’s second fallow weekend it could be a big blow for Scotland, who would be without more than 10 frontline players who are set to return to their clubs in the Premiership and Top 14.

It will also be a blow to Gregor Townsend who would have fancied his side to land a first Scottish win in Paris since 1999, against a French team whose preparations have been thrown into disarray.

What happened last time out?

Ireland were looking to bounce back from their opening round defeat to Wales when the faced France at the Aviva Stadium, but they were left to rue what might have been as a clinical French side ran out narrow 15-13 winners, emphasising their title credentials in the process.

England steadied the ship against Italy following their shock defeat to Scotland at Twickenham, with Eddie Jones’s side picking up a bonus point with a 41-18 win. However, the defending champions were disjointed at times and will have to improve again against Wales.

As for the Welsh, their recovery continued against Scotland at Murrayfield with a 25-24 win. They took advantage of Zander Fagerson’s red card to move within a game of the Triple Crown, with Louis Rees-Zammit’s stunning try paving the way for victory.

Andy Farrell has made seven changes for Saturday’s clash, with Johnny Sexton, James Ryan and Tadhg Furlong among some heavyweight returnees.

In his column this week Gordon D’Arcy has suggested this year’s trip to Rome will be more revealing than most - will Ireland revert to type or can they give glimpses a new attacking plan is taking shape under the watch of Mike Catt?

He writes: “You know what an ‘Irish performance’ looks like; solid set piece, punishing carries in midfield by Henshaw and Ringrose - with one of them pulling up as a result - before some speed of thought by Murray or Sexton picks the lock.

“That might prove to be enough against Scotland and by then, who knows, England could have lost some big names as good old pride in the jersey, and a desire to play for each other, earns Ireland a third-place finish.

“But imagine if Ireland click into the Farrell era with coaching that makes you want to apologise to Catt and Easterby for the grief that has been sent their way of late.

“That is where the Team Of Us finds themselves entering Stadio Olimpico. This is a dangerous fixture, another crossroads if you will, where the team will either limp onto Edinburgh or put Gregor Townsend and Finn Russell on notice.”

Italy are now without a Six Nations win since February 28th 2015 - a run of 29 matches. Ireland will sorely want to avoid being associated with that run coming to an end. . .

What are the bookies saying?

France remain favourites to lift the title in March.

There are high temperatures across Europe this week, with Rome expecting 18 degrees and sunshine on Saturday. 18 degrees!!! We can dream. . .

Not yet - but we’ll get there.

Blackmore back among the winners at Fairyhouse 21:32
Elite athletes still required to undergo 10-day mandatory quarantine 20:32
Klopp says Liverpool need ‘perfect performance’ to overcome Real deficit 20:00
Grand National hero Rachael Blackmore on the mark at Fairyhouse 19:32
Solskjaer’s son has the appetite for a go at Mourinho 18:50
Crossword Get access to over 6,000 interactive crosswords