Connacht bidding to end 57 years of pain in Belfast 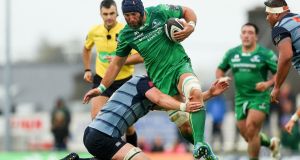 Connacht’s record in Belfast is so dismal, not even their longest-serving player, John Muldoon, has ever won in the Kingspan Stadium or its previous incarnation, Ravenhill. In fact, he wasn’t even born. It was November 1960.

In what must have been a classic of its time, Connacht won 6-3 and rather bizarrely were actually completing a fourth successive triumph in Belfast. Since then, however, Connacht have lost 34 times in a row away to Ulster.

As he and his team-mates are no doubt tired of being reminded, Seán Lemass was Taoiseach, Alfred Hitchcock’s Pyscho was released for the first time, Floyd Patterson was the unified heavyweight champion of the world and Burnley were champions of the Football League, and John F Kennedy and Richard Nixon had just conducted the first presidential televised debate in black and white. Considering JFK was elected that same month, it’s hard to believe the world, or at any rate the USA, has progressed that much in the interim.

Given the regularity of their visits north of the border, it’s hard to imagine there’s been a barren sequence quite like it. In their last 14 visits to what was Ravenhill, they have lost and suffered heavily – witness the 56-12 thrashing in Pat Lam’s first campaign two seasons ago – the average scoreline being 29-11 in Ulster’s favour.

“It’s a difficult place to go to,” admits Muldoon, which must rank as something of an understatement.

“The crowd don’t make it easy for you. They get on to the ref; they make it a hard place to go to. Ulster perform really well at home and it has been a hard place but in the last few visits, we may have got a bonus point or two. We’ve been a little bit unlucky once or twice. We’re closing the gap.

“It’s tough. Look at their squad,” added Muldoon, who’s also mindful that Ulster will be smarting from last Saturday’s surprise first defeat of the season away to Zebre.

“They’re a quality team and they will be disappointed with the result at the weekend. Unlike us, they have started the season well apart from that blip last weekend so I’m sure they’ll be looking forward to us coming up there before the Champions Cup.

“We’re not going to worry too much about them. We will focus on ourselves. We have made a few errors which have cost us heavily. We need to be more consistent over 80 minutes and then if that is good enough, fair enough. We’re looking to get better every week. We’ve been better, we just haven’t got the results. We haven’t deserved the results but we’re getting closer.”

Following tomorrow’s game, Connacht are consigned to a return to the Challenge Cup, with their first game being away to Oyannax next Sunday week, before they host the Worcester Warriors at the Sportsground and possibly a meeting with the even more evergreen Donnacha O’Callaghan and Peter Stringer.

Secondary competition though it may be, it also offers another route into next season’s Champions Cup, as well as a shot at silverware in its own right.

Reflecting on the more rarefied air of last season’s Champions Cup, when they came within a score of a quarter-final against Munster, Muldoon said: “I think ultimately you see some of the results we had last year, beating Wasps, beating Toulouse, beating a few of the Irish teams at home; big results but ultimately consistency throughout the year cost us.

“We were able to throw in big performances, we were able to get big wins but were inconsistent in how we do it. We throw away results that unfortunately cost us the chance to be in the big competition.

“I stood here five or six years ago saying something similar, about consistency of performance. The difference is we’re at a higher level in a better competition now with bigger and better players. It’s funny, you’ve got to strive to be better and you’ve got to get better all the time.

“We won the Pro12 18 months ago playing a brand or rugby which at the time was maybe unorthodox for Connacht, or whatever, but the reality is that wouldn’t win the competition 12 months later and it won’t win us the competition this time.

“So we’ve a new coaching team, a new way of doing things and a new outlook of how we do things. But we had to do that because it won’t win us a competition, that way of playing. What am I trying to say? Rugby is evolving. It’s getting harder. Teams figure out teams very quickly and you’ve got to try and be better every single game and every year.”

Connacht can also take some positives from last Friday’s thrilling encounter away to the champions Scarlets, as well as their try-scoring bonus point. It was always going to take time but that performance suggested the new methods of Kieran Keane are beginning to bear fruit, albeit Connacht have been undone by some basic skills’ errors.

“I don’t want to sit here and make excuses but we’ve had a couple of games in absolutely horrific conditions as well which hasn’t helped the situation,” Muldoon pointed out. “That Glasgow game should be chucked in the bin and never looked at again because it was one the worst days I’ve ever played in the Sportsground.