Pumas’ passion takes some of the gloss off Ireland’s win

Ireland were in control , but Argentina refused to fade away – and it was no bad thing 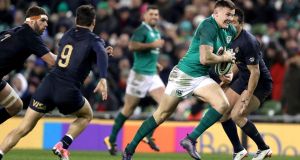 For half an hour it was excellent, and even for the guts of an hour it remained pretty good, but maybe it’s no bad thing that Argentina defied the prevailing wisdom they’d fade away by instead taking some of the gloss off this win.

Ireland were ahead from the fourth minute, and always at least two scores clear from the 20th minute onwards, so one always felt they were in control. This was in the main due to the assurance they again displayed in absorbing multiple phases of attacks, comfortably keeping their shape and numbers.

On top of restricting the Springboks to just three points, Ireland led 13-0 at the break, makng the nil part look almost easy.

Andy Farrell has had the profile of a limbo dancer this past month, in that the media-shy defence coach has hardly been seen in public, but his stamp was all over this game.

The phenomenal Tadhg Furlong backed up his strong day at the coalface with 17 tackles, with Cian Healy and Rory Best also in double figures, and the back-row chipped in with over 40, with CJ Stander augmenting his 15 by making 19 carries.

To their credit, though, the Pumas wouldn’t go away. Indeed, even in defeat, not for the first time you came away from an Argentinian game with your respect for Los Pumas enhanced. At the end of an incredibly arduous season for these Jaguares and Pumas players, in which they have totted up 180,000 air miles and almost 50 flights, and at the end of an exhausting encounter while resigned to a 10th defeat in 12 Tests this year, they could have chucked in the towel. Instead, they were still running the ball brilliantly from behind their own line to eventually score with the game’s last play.

Indeed, having been banging their heads against a brick wall for much of the first hour, they found a way to unlock the aggressive Irish defensive line speed with delicate grubbers into the in-goal area by Nicolás Sánchez and Gonzalo Bertranou for their tries by Joaquín Tuculet and the utterly deserving Ramiro Moyano. This was either side of the Pumas for once outflanking the defence when Tudulet’s long skip pass put Juan Manuel Leguizamón over in the corner.

The latter followed a break out from behind their own line as replacement winger Sebastián Cancelliere, in only his fourth Test and who looks like another real find, danced through a thicket of defenders and set Moyano free with a wonderfully delayed offload.

As ever, they also brought a huge amount of emotional energy to the encounter. Their captain Agustín Creevy and prop Santiago García Botta held up a Pumas jersey with the number 44 for their national anthems, a moving tribute to the 44 crew members of Argentinian submarine ARA San Juan, who are believed dead following its disappearance on November 15th.

Hourcade said Argentina were surprised with how Ireland played a running game, having expected them to kick more.

Working off another solid platform in the scrum and the line-outs, Ireland’s ball-in-hand game, in the first-half especially, was founded on their trademark efficiency at the breakdown. Joe Schmidt would have approved of Adam Byrne’s first act in an Irish jersey – coming in off his wing to effect a clear-out from a Rob Kearney carry. That was one of many by Kearney, who had a barnstorming match in something of a statement performance.

Whereas Argentina were often committing four men to recycle the ball, Ireland invariably only had to commit two or three, such was their technique. The number on the back of the jersey was immaterial, although few do it better than Peter O’Mahony and Iain Henderson who was almost as low as a grasshopper when clearing out Pablo Matera early in the game.

As ever, there was immense detail in the planning, such as the pre-planned two-phase move off a line-out on the right when Bundee Aki trucked it up the middle and, identifying that scrum-half Martín Landajo drops back on the left flank while winger Emiliano Boffelli sweeps infield, Conor Murray crosskicked back to Byrne. A startled Landajo slipped, and, but for a wicked bounce, this would have been a seven-pointer concocted from the video room.

In addition to the pack also mauling in for a try, there was precision in the way Jacob Stockdale’s two tries were fashioned. The way Chris Farrell attacked the inside shoulder and pulled his pass back for Johnny Sexton was the high point in a very impressive outing, in which he also defended the outside centre channel very well.

Sexton, who landed five from six, was class in everything he did and was as brave as ever, giving two try-scoring passes to Stockdale, who must think this test match rugby is a lark after scoring four tries in four tests. Coupled with his form for Ulster this season and last, he now has 18 tries in his last 22 games and in eight starts this season the only team he hasn’t scored against is Leinster. That’s what happens when you have an acute sense of anticipation of where the space is, to go with his physique and speed, as well as a sense of the occasion. Find of the series – and there’s been a few.