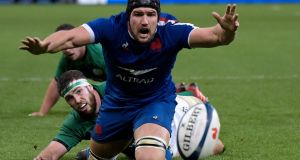 The laughter must have been ringing in Paul O’Connell’s ears back in the London studio but Inverdale’s pre-match ridicule proved accurate. Ireland lacked the ability to apply the basic fundamentals at crucial moments of a match that was initially developing into an opportunity to win in Paris and snatch the title from England.

The penalty try, awarded by referee Wayne Barnes on 29 minutes to make it 14-10, proved a double blow as Caelan Doris was sin binned for tacklingFrançois Cros before he could dive on the loose ball. Stockdale - who has made a couple of high profile errors in big games - had already fumbled possession a few moments earlier. When the contest demanded a solid piece of fullback play, the Ulster winger could not handleVincent Rattez’s grubber and the road opened up for France.

Rob Kearney (on Virgin Media): “It is just simply a lack of concentration...Greasy balls are difficult to take sometimes.”

Ireland trailed 17-13 entering first half injury-time when Barnes deemed Aldritt and Ollivon’s gang tackle on CJ Stander warranted a penalty for not releasing. Johnny Sexton, well inside his range, had a quick chat with James Ryan before kicking into the right corner as Doris returned from the bin.

“We’ve made plenty of those decisions in the past and won games because of them,” said Ireland coach Andy Farrell. “I back the players to understand the feel and flow of the game. We scored a try from pick and go in that first half and with the momentum we thought we could get another seven points. I back the players to make those calls.”

The decision back fired with the French increasingly close to smothering a succession of individual Irish ball carriers before Dylan Crétin latched over an isolated Will Connors.

“We went for the try, a brave decision,” said Sexton. “We were very close but we were not accurate enough.”

The second half was three minutes old when Sexton gathered a long kick and ran out of his 22 before sending up a garryowen for Andrew Conway to chase. Anthony Bouthier, the French fullback, beat Conway in the air and offloaded for Romain Ntamack, despite being held by Robbie Henshaw.

Gaël Fickou glided into Irish territory, only to be blocked by Sexton after chipping into the left corner. Stockdale appeared to have the situation under control but Antoine Dupont sprinted past the Ireland fullback before a magnificent two handed pass, over Doris’ head was gathered by Ntamack, who fell over the line.

At 22-13, Ireland needed a 15 point swing to stop England from winning the 2020 Six Nations Championship.