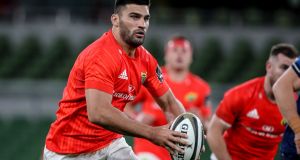 Rugby World Cup Winner. It has a certain cache to it. It’s an elite group. And the timing of the revelation, along with the two players’ new-found status, made the statement of intent by Munster all the more serious.

The dust had barely settled on South Africa’s Rugby World Cup win when, within a day, it was revealed that their inside centre Damian de Allende, along with their giant lock RG Snyman, would be joining Munster.

Their signings were with the 2020-21 season in mind but now, as events have transpired, while RG Snyman has been unluckily ruled out, De Allende is on hand to help Munster in their quest to win the 2019-20 Pro14 and with it a first piece of silverware since beating Leinster in the 2011 final of this competition.

Not that, insomuch as one can tell from a Zoom call, De Allende carries any airs and graces with him following that triumph with the Springboks in Japan last November, or even that his status has led to him giving a profound contribution off the pitch.

“I’ve spoken to Johann (van Graan) quite a bit but it’s nothing about pressure, it’s more about enjoying myself. Obviously we won the World Cup but that doesn’t make me a better player than the other centres that are here. I think me coming here I can learn so much from Chris (Farrell), JJ (Hanrahan), from Rory (Scannell) and from Alex (McHenry) so it’s been very good.

“I think the biggest thing for me is just to know how to fit into the system and then I can start maybe giving back and trying to help out but I don’t see it as, I know I’ve won a World Cup but I can’t picture myself coming in and trying to changes things to benefit me. I think it’s me who has to change and try and benefit into the system and then we can start working around from that.

“I’ve helped out quite bit, obviously learning all the new calls and stuff has been quite challenging but the guys have helped me quite nicely and surprisingly they haven’t got frustrated with me yet but it has gone a bit better over the past two weeks.”

He admits his partnership with Farrell is still developing but there are clear signs of a potent midfield in the making. In this, playing in an unchanged backline for the first three games should be beneficial, and part of Farrell’s impact may be down to De Allende taking some of that big ball-carrying pressure off him.

Indeed, while there was more of De Allende’s powerful running against Connacht last Sunday, it was striking to note how cleverly Munster used him as a decoy in his debut last Saturday week against Leinster.

De Allende explained that he had initially signed a two year deal with the Panasonic Wild Knights in Japan, but that the second year was optional. So when Johann van Graan contacted his agent last year before the Rugby Championship he was persuaded to come to Munster after the World Cup and not to take up that option in Japan.

“We didn’t want to let it out in the media during the World Cup. And I don’t know who leaked it. But I had signed before the World Cup. I hadn’t spoken to Rassie (Erasmus) or Jacques (Nienaber) or Felix (Jones) about it yet. It was probably my closest family like my mum, my dad, my brother and my girlfriend and my brother’s wife, who actually knew that I was coming to Munster.

“For me, it was quite an easy decision to make. Limerick reminds me a bit of home. Just watching Munster on TV and watching Thomond Park reminds me of Cape Town and the Stormers.

“Over the past couple of years, I was with the Stormers, then it hadn’t been doing well as a franchise. We weren’t getting the support that we usually get. When I watched Munster on TV, just to see the supporters being so close to the field. The Irish fans, especially here in Limerick and in Munster, they can actually see that you left it all out on the park.

“I think when they see that, that’s what they appreciate the most. So, I’m really looking forward to playing in Thomond Park.

“The next time we play, it might still be empty, but I am really looking forward to a sold out Thomond Park and just meeting some fans after the game and trying to feed off their energy as well.”

Those fans will hope Munster can benefit from De Allende’s recent experience of helping to win rugby’s biggest prize - Keith Earls, Conor Murray and Stephen Archer are the only survivors from the victorious 2011 Pro12 winning team. The key, then, to winning big knock-out matches?

“I would say just being decisive and not letting the occasion get to you. I think it might be a bit different now because even though it’s knockout footy there won’t be crowds so I don’t think there will be that added pressure of crowds screaming and shouting. We are playing at Aviva Stadium but luckily for us they won’t have their own supporters cheering them on.

“I think you get a lot of momentum and energy from the home crowd so we’ll have to bring our own energy and spark our own energy on the field and hopefully our energy will be bigger and a bit more than theirs.”