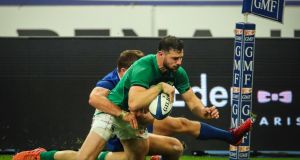 Early interventions were positive but his handling thereafter was really poor. Two fumbles in quick succession, the second led to a penalty try and a Doris sin bin. His concentration in defence was lacking and takes away from his undoubted class going forward. He has character as evidenced in his attacking chops when others might have hidden. Rating: 4

Brilliant individual try, underpinned by a great change of direction and pace, excellent strength and in being decisive and singular in focus: made some excellent reads in defence and invariably got over the gain-line. Rating: 8

Superb carrying giving Ireland so many positive gain-lines and was the standout attacking threat. Poor decision to kick in that led to the turnover for France’s third try. Replaced after 52 minutes by Chris Farrell, one presumes for an injury/head issue. Rating: 7

He was excellent for the most part and never stopped trying or turning up off his wing to try and add some value when his team was attacking. He worked hard in defence. Rating: 7

Brilliant grubber kick for Hugo Keenan’s try scoring chance. Gambled and twice elected to kick penalties to the corner but maul was splintered on both occasions. His tackling, decision making and the execution of some kicks, was a little up and down much like the general performance. Rating: 6

He started brightly but levels fell off thereafter. He needed to hustle quicker to get out to Gael Fickou in the build-up to France’s first try. Missed a couple of tackles, gave away a penalty, one or two unsympathetic passes. Fitful. Rating: 5

A try scorer in his 100th cap, was a nice embellishment. Threw up and sustained a head knock all in the first 25-minutes and was back by the 39th before coming off ahead of the final quarter. He was missed in the scrum when he went off. Rating: 7

Lineout functioned smoothly during his 52 minutes and was brittle after he left. No faulting his work-rate or application but needs to have a more positive contribution on the attacking side of the ledger. Rating: 6

He won an early scrum penalty and excelled in that facet of the game and in his work-rate. He needed to get out quicker to not allow Fickou the outside channel, albeit that it wasn’t his fault. Good latch for Healy’s try and penalised incorrectly by Barnes in the second half. Rating: 7

Conceded penalty in French 22 early on but his work ethic was exemplary. He managed a turnover but had much less influence at the breakdown against a physically big French pack. Rating: 6

Fumbled the kick-off but got away with it and thereafter was one of the few Irish players who consistently competed physically with the home side on a level footing. Good latch for Healy’s try, prodigious work ethic. Rating: 7

An excellent early turnover, the yellow card was an instinctive reaction and the issue wasn’t of his making initially. He will be better for the experience but the French backrow won that battle individually and collectively. Rating: 6

His usual excellent tackle stats, eight made, one missed but he discovered that having to defend against France is a different prospect, much more energy sapping. Carried effectively on occasion and worked hard for his 52 minutes. Rating: 6

Arguably Ireland’s best player along with Henshaw, he was typically industrious and intelligent in the way he played. He won a couple of penalties at the breakdown and was effective on both sides of the ball. Rating: 8

The lineout and the scrum, collective skills, fell apart a little when some of the starters were taken off and despite some energy they didn’t have much opportunity to rescue an Ireland side that were misfiring for most of the second half. Rating: 5

Nothing wrong with the way the team set-up, simply too many mistakes. Pilot error, so to speak. Andy Farrell will be keen to absorb the lessons both in relation to individuals and systems. Three wins in the Six Nations is a decent start, the manner rather than the actual defeats to England and France were disappointing but it is just the start of a journey. Over the next four Test matches he will have a chance to examine the way he wants to play and the players best suited to achieving that. Rating: 7