Kieran Marmion returns to action as Connacht hold off Cheetahs 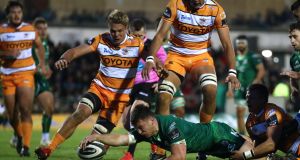 Connacht’s Tom Farrell scores his side’s opening try during the Guinness Pro 14 game against the Cheetahs at the Sportsground. Photograph: James Crombie/Inpho

Learning how to grind out games has been traditionally a tough lesson for Connacht to learn, but coach Andy Friend finally believes his team is getting the hang of it.

Although “still not playing their best rugby”, Connacht are showing a developing mental toughness and game management nous, exemplified in their 25-17 win over the Cheetahs.

“The way we managed to grind that win out shows what the squad is made of,” Friend says. “it was not clinical, but hard fought, and when we needed to get the win and needed to produce something at the tail end, we did. And that is the sign of a quality side.”

And with nine wins from their last 12 games in all competitions – including Saturday evening’s hard-fought victory – Connacht have maintained their momentum, moving into third place in the Pro14 Conference A, and edging four points ahead of Ospreys and Cardiff. The biggest loser from the weekend’s reshuffle was the visiting Cheetahs who left the Sportsground with nothing and dropped to sixth.

It was a tough result for the South Africans who had led 12-10 at the break, and until Connacht’s 78th minute try, they always looked capable of stopping Connacht from achieving a rare home and away double.

“To secure the double over them was pretty important,” says Friend. “Both sides made mistakes, both sides put the other under a lot of pressure, ours with territory. We had a theme of trying to win the collisions, but they won that – they are really big men who asked some questions of us. But the mark of a quality side is one that can hang on and grind it out, which we did, and more importantly to deny them getting a bonus point was really important for our season.

‘There is a real inner belief there, they didn’t panic, stayed on task. Jack Carty controlled that and it’s great to have him back and the two quality scrumhalves Blade and Marmion. It was a real gutsy performance. At crucial times, the rocks that have been their for us – the set piece, the key playmakers and decision makers – stood up, and it was fitting Jarrad Butler scored the winning try.”

In difficult wind conditions, exacerbated by rain second half rain, the visitor were out of the blocks quickly – a super cross field kick setting up left wing Sibahle Maxwane for the opening score after 10 minutes, converted by Tian Sherman. After a Jack Carty penalty, Cheetahs added a second, catching Connacht on the outside after a misread in defence produced a overlap and fullback Louise Fouche dotted down.

Despite enjoying territorial dominance, and producing clear-cut chances, Connacht struggled to break through the Cheetahs’ defence. Small errors proved costly until centre Tom Farrell finished a period of concerted pressure to close the gap, with Carty adding the extras.

There was a more clinical edge to Connacht in the second half, epitomised by a 46th minute try. Carty sent a penalty to touch and the pack delivered with hooker Tom McCartney claiming the honours. Carty’s conversion put Connacht in front for the first time. The Connacht outhalf continued to keep Connacht in the right end of the park, but against the run of play, Cheetahs scrumhalf Shaun Venter capitalised on a mistake at the ruck and galloped from his own 22 to level the score.

It was not until the 72nd minute that Connacht edged ahead with a Carty penalty, and just two minutes from time, he was again instrumental in setting up the winning try, finished by captain Jarrad Butler.