If visitors’ pack can establish a suitable platform, backline have the nous to capitalise 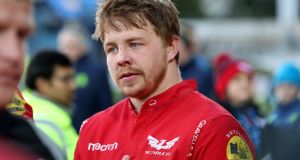 James Davies: the Scarlets flanker has been released from the Welsh national squad and will line out against Ulster. Photograph: Bryan Keane/Inpho

Given the Scarlets double-digit personnel commitment to the Wales squad for the Six Nations Championship game against Ireland at the Aviva Stadium and the injuries suffered by fullback Johnny McNicholl and wing Tom Prydie in last weekend’s Pro14 defeat to Leinster, Ulster’s chances of sneaking a win are considerably better than they might otherwise have been.

The home side though can call upon the same pack as they fielded in the RDS as flanker James Davies and hooker Ryan Elias have been released from the national squad. As an aside it’ll be interesting to note how Ulster’s number seven Nick Timoney fares at the breakdown against an arch poacher in Davies.

Ulster coach Jono Gibbes has made two changes from the team that lost to Edinburgh with Andrew Trimble making his 229th appearance in place of the injured Craig Gilroy and John Andrew coming in for Rob Herring (elbow) at hooker. From a statistical bent the sides have shared the honours in the last six meetings and the Scarlets are coming off a brace of defeats.

Wayne Pivac, the Scarlets coach said: “We have the ability to open up a bit of a gap on Ulster and push some pressure on them and they’ll know that. We know that if we don’t get the result it closes right up. With Leinster next week it’s going to be a testing time for us. We’re working hard with the group to prepare ourselves for what’s coming.”

The home side contains a number of young players in the backline in marked contrast to the visitors who have oodles of experience. The key for Ulster is how the pack fare and if they can offer any sort of decent platform then the improbable might just be possible.