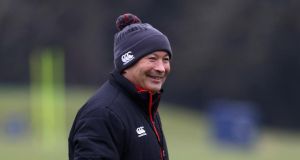 Eddie Jones: “They have brought out every strategy you can think of. I’m sure there’s an ex-Scottish player ready to come out today and say something about how they hate us, they want to rub our nose in something, we don’t respect them.” Photograph: David Rogers/Getty Images

Eddie Jones insists England do not need mind games to motivate them for Saturday’s Calcutta Cup clash with Scotland.

Jones has adopted a tactful approach to the Six Nations showdown in Edinburgh by refusing to engage in the phoney war that has seen the vast majority of the shots fired from north of the border.

New Zealand-born prop Simon Bergan added to the hostilities by declaring that in advance of his move to Edinburgh in 2014, “I sort of knew that everyone hates England”.

Jones, however, has refused to engage a fortnight after ruthlessly placing the temperament and conduct of Wales duo Rhys Patchell and Alun Wyn Jones under the spotlight.

“They have brought out every strategy you can think of,” Jones told Sky Sports. “I’m sure there’s an ex-Scottish player ready to come out today (Thursday) and say something about how they hate us, they want to rub our nose in something, we don’t respect them.

“It’s designed to get them up for the game. We’re up for the game, regardless of what’s said. We always chat to the referee, but it won’t be about that (defending from an offside position), it’ll be about aspects of what he wants from the game, because we want to play the game legally.”

Jones has made just one change to the team that dispatched Wales 12-6 at Twickenham with Nathan Hughes replacing shoulder injury-victim Sam Simmonds at number eight.

Fijian-born wrecking ball Hughes has recovered from the knee ligament damage sustained on club duty for Wasps in December and is thrust straight into the back row.

“Sam has done really well for us and is a good young player, but Nathan’s a big carrier and a strong defender,” Jones said.

“He has a bit more muscle around the ruck, which at Murrayfield might be useful. I’ve never seen him in better physical condition.

Jonathan Joseph has edged Ben Te’o to retain his starting place at outside centre — a position of escalating competition between two players who offer different strengths.

“It’s a hard selection but early on, given the way Scotland have traditionally attacked under Gregor, that Joseph’s defensive skills out wide might be very useful.

“Te’o will come off the bench and carry it through. He’s a great carrier, a strong carrier and good on his feet — a good defender in a different sort of way.”

Jones dispelled any concern over Owen Farrell’s fitness after the playmaker played only a limited role in training since the win against Wales by declaring “he’s full of beans”.

On the bench, Joe Marler replaces Alec Hepburn after serving a six-week ban for a dangerous clear-out and will provide cover for loosehead prop Mako Vunipola, but the replacements otherwise remain unchanged.