Michael Lowry gets a chance to prove himself against Benetton 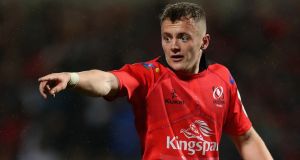 Kick off: 7.35pm. Venue: Kingspan stadium. On TV: Live on Freesports and eirSport.

Michael Lowry’s progression from outstanding schools player to Ulster’s senior team incorporated a nine-month hiatus because of a groin injury and a switch in position from outhalf to fullback. Quite apart from his lavish gifts as a player, his teammates were struck by his dedication to the rehabilitation process.

Ireland captain and Ulster hooker Rory Best said: “Having seen him around the place for the last year, we saw a lot of him bouncing on Swiss balls and stuff, but his work ethic is what we saw.”

Lowry won back-to-back Ulster Schools Seniors Cups with RBAI, but then spent nine months on the sidelines. It was a tough period, and one he didn’t sugar-coat when reflecting on it in a recent interview.

“Going from school and Schools Cups and then being plagued with injury, just one injury, for nine months, it was tough. Other boys were pushing on for the senior team and I found it quite difficult at times.

“Having that injury early on made me realise how professional the environment is, how professional you need to be to cope in the professional environment. You get mentally resilient because if you’re out for a long period of time people can think ‘why should I do this’, but once you see progress it makes you want to keep driving standards, keep getting better and keep getting fitter and stronger.

“At the time I was pretty much at breaking point. But, saying that, it’s in the past now. It’s gone. I’m at peak performance now, and it’s beneficial mentally and physically.” He returned in time to play a part in the Under-20 World Junior Championship, producing a standout performance against Japan from the unfamiliar position of fullback.

However, it was his Champions Cup display for Ulster against Racing 92 in Paris earlier this season that introduced him to a wider audience. Ulster head coach Dan McFarland entrusted him with the No 15 jersey, and he didn’t disappoint with a marvellous performance.

In the modern era of rugby behemoths, Lowry at 5ft 7in and a wafer thin mint under 12½ stone is a throwback to the physiques of the amateur era. His bravery, speed, footwork, range of passing and kicking game are a joy to watch as a will-o-the-wisp escaping the clutches of defenders.

Injuries have also curtailed his game time a little this season, but he returns to the Ulster team for Friday night’s Pro14 game against Benetton, one of two personnel changes in the backline. Louis Ludik switches from fullback to wing in the absence of Jacob Stockdale, while the promising James Hume comes in at centre for Will Addison.

Lowry’s eventual home will probably be at outhalf, but McFarland’s initial decision earlier in the season to run him at fullback was first prescient and then vindicated.

He explained: “You make a decision if you think a player has got the ability to play and improve your side. The guys know Michael well, and I know him well from what I have seen of him so far. He is an exciting player, he is a confident player, he is a really good footballer with great skills.”

There are six changes to the pack. Andy Warwick and Rob Herring start, Alan O’Connor comes into the secondrow and will captain the side, while the inclusion of Ian Nagle, ostensibly a lock at blindside flanker in an all-new backrow that includes Nick Timoney and Greg Jones, is an interesting experiment. It’s good to see Rob Lyttle included among the replacements following a long-term injury.

Benetton are without 16 players either through Italian squad commitments or injury, but still harbour a smattering of experienced players. The team will be captained by Dubliner Ian McKinley, and includes players like fullback Luca Sperandio and wing Monty Ioane that will require strict supervision.

The Italian club are two points ahead of their hosts in the conference table so Ulster’s need is great, and tagging on a four-try bonus point would be highly desirable.

There is no doubt that the home side possess a three-quarter line that can score tries, but that will be predicated initially on the platform up front and then the game management and control at halfback.