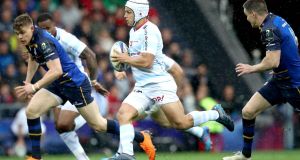 Pat Lambie retired from rugby this week at the age of 28, the latest player done too soon after suffering repeated concussions. The South Africa outhalf stood out for his relative lack of weight, little more than 13st, and was a target for bulky ball-carriers.

It was a collision with the Ireland number eight CJ Stander, a player nearly five stones heavier, in 2016 that started the countdown for Lambie’s retirement. The following year, he spent six months out after colliding with a teammate in training and suffered another concussion that December playing for Racing 92 against Oyonnax.

“I followed the advice of two neurologists who advised me to stop playing rugby,” Lambie said. “I have not been able to do any weight sessions in the last 10 weeks, because I have been suffering from headaches, migraines, eye irritations and trembling legs. I am bitterly disappointed because I still had some dreams on the rugby field but I am relieved to know I will not be at risk of further, more serious head injuries. I have to avoid any sport that requires contact.”

Rugby union at the top level is, just, still a sport for all shapes and sizes but Michelin-man props have had to flatten their tyres, beanpoles are required to do far more than chug from lineout to lineout and players with the playing weight of their forebears 50 years ago tend to be confined to scrum-halves, distributors who rarely offer themselves as a target, the game’s version of a quarterback.

When outhalves of the stature of Lambie take to the pitch, how often do coaches refer to playing down their channel, rugbyspeak for getting a big ball-carrier to run at them hard and use the weight imbalance to knock them out of the way? Some 10s relish the physical challenge: Jonny Wilkinson was one but how it cost him when his body eventually rebelled against repeated hits.

If a player throws a punch, a red card is likely to follow. Charge into an opponent to exploit weight advantage and it is not only legitimate but encouraged. How many more players like Lambie need to have their careers ended early – and only time will tell whether he has suffered one serious head injury too many – before anything meaningful is done?

There is a contradiction at the heart of this. Take Munster’s European Champions Cup match against Exeter at Thomond Park last weekend, close to a winner-takes-all with a quarter-final place at stake. From the first minute to last, it was unremitting confrontation. It was minimalist, with no one able to find space, compelling yet a turn-off, an extreme example of how the sport at the top is shedding the nuances that made it unique. The commitment was admirable, the uniformity repellent.

The contradiction is that while World Rugby says player welfare is at the heart of changes to its laws and regulations, it is at the same time driven by a commercial interest that sees time taken to reset scrums or form lineouts as a deterrent to sponsors and broadcasters. It has detonated an explosion of breakdowns at the expense of set pieces: the ball in play time is more than double what it was in the amateur era, and as the majority of injuries occur in the tackle, it has significantly increased their number.

Take the law change that banned kicking directly to touch from inside a player’s 22 if the ball was originally played by him or her, or a teammate, from outside the 22. The intention was to deter direct kicking to touch, so that the ball was kept in play: aside from the question of who kicks directly for touch now anyway, unless they have been awarded a penalty, what is wrong with periods when the frenzy is paused for a breather?

Set pieces have the advantage of allowing backs to attack backs. With so few players committed to a breakdown, forwards fan across the field to form a rugby league-style defensive line. Unless there is a missed tackle, a players goes to ground for the cycle to continue. In its way it is no more entertaining than a reset scrum, often drearily repetitive – rugby league with, in some competitions, a contested tackle area. The desire is to keep increasing the ball-in-play time, never mind the quality of play, to help attract a new audience.

World Rugby has approved radical law changes in Australia for a new competition that seems to want to turn a union scrum into a league one. Even more ball-in-play time, more action, more injuries, lip service paid to careers ended prematurely with no one bold enough to say the point has been reached where less rugby is required, not more. Otherwise it will be a return to the early days of the game where the first three forwards when a scrum was called formed the front row and specialisation was just a long word.

A report in the British Medical Journal, which found the average weight of international players had increased by 25% since the 1950s, called on World Rugby to change the laws to encourage speed and skill at the expense of mass. The authors noted that, while ability and speed were innate and therefore not coachable, players could be bulked up to increase their mass. Gym monkeys, the strenuous yet easy option.

Why is Danny Cipriani not in the England squad? May it have something to do with his defence where, at his most effective, he is a mere speed bump? Imagine Barry John, Phil Bennett and Tony Ward being canned for the same reason. Think what the game would have lost and what it is now forfeiting. Time to go back to a few basics and give future Lambies a chance.