Leinster suffer a brutal first defeat to the Ospreys since 2014 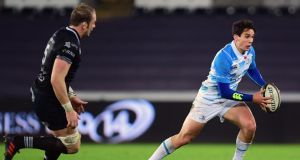 Leinster missed out on the chance to claim their place in the Guinness Pro 14 play-offs with three games left to play as they slumped to their first defeat to the Ospreys in four years.

You had to go back to April, 2014 for the last time the Welsh region, four time winners of the Celtic League crown, got the better of their visitors, but they were the dominant force in a hugely physical battle that saw them pick up a bonus-point nine minutes into the second half.

Leinster hit the front with a seventh minute penalty from in front of the Ospreys posts by Ross Byrne. Good approach work by Rory O’Loughlin, Scott Fardy and Fergus McFadden created the bridgehead in the Ospreys 22 and hands at the breakdown earned the penalty shot.

Some ferocious tackling in a no quarter asked, none given first-half led to both sides losing players to injuries. Ospreys backrow man Olly Cracknell was the first to go and then Leinster lost three of their back division.

Fergus McFadden and Noel Reid went off for HIAs and didn’t return and then Dave Kearney, who had replaced Reid in the 23rd minute, left after only 11 minutes with his shoulder in a sling. That forced a back line reshuffle with Joey Carbery moving from full back to centre and Jamison Gibson-Park going in at full back.

The Ospreys made the most of the disruption as they plundered three tries to move into a 19-3 lead to seemingly leave Leinster all at sea. But despite their successes, there was a late sting in the tail in the half as Barry Daly picked up a vital score.

The first two of the three home tries came from the Ospreys full back Dan Evans, as he benefitted from some neat approach work by Justin Tipuric and then Keiron Fonotia to score wide out on the left. Dan Biggar converted the first, but missed with his second attempt.

No sooner had Kearney departed than Ashley Beck created the opening for scrumhalf Tom Habberfield to dive over for the third try. Biggar had no problem with the conversion and all the home side had to do was defend the re-start and head into the dressing room for a very sweet cup of tea.

But somehow Adam Byre managed to out-jump Alun Wyn Jones to reclaim the kick-off, Sean Cronin crashed up the middle and Carbery grubber kicked into oceans of space behind the Ospreys defence to allow Daly to claim a much needed try that was confirmed by the TMO despite his feet being in touch in goal.

The irrepressible Tipuric, off to play for Wales at the Commonwealth Games on the Gold Coast next week, picked up the bonus-point try nine minutes after the break as he popped up a metre out to take a pass from Fonotia. Biggar added the extras to stretch the lead to 18 points.

Leinster needed to score next and a neat kick through from a driving maul 10 metres out by Luke McGrath allowed Rory O’Loughlin to race onto it and score a try that Carbery converted. Then the full back-turned-centre stepped up to kick a penalty to give his side a sniff of a comeback with 20 minutes to go.

That hope didn’t last long, though, as Biggar kicked a penalty for hands at the breakdown to stretch the gap to 11 points. He also kicked another with the final act of the game