Duncan Weir comes in to steer Edinburgh past Connacht 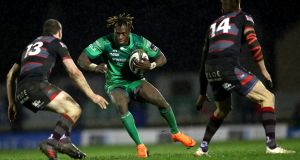 Niyi Adeolokun of Connacht runs into traffic as Edinburgh’s Mark Bennett and Dougie Fife defend during the Guinness Pro 14 game at the Sportsground. Photograph: James Crombie/Inpho

Connacht’s hopes of Champions Cup qualification will now rest on the possibility of a one-off conference playoff after a bonus-point defeat to high-flying Edinburgh.

Continuing the form they showed against the Cheetahs, Connacht had a grip on the contest until Edinburgh replacement outhalf Duncan Weir racked up 13 points in the final 10 minutes.

It was a massive blow for Kieran Keane’s side who must now ensure the keep their noses in front of a chasing Ospreys for that vital playoff decider.

“We gave them easy access back into the game,” Keane said. “Edinburgh are a tough side and a form side, but I thought we controlled everything relatively well and had our noses in front, but the pressure told and we capitulated in a couple of areas.”

Connacht held a four-point lead at half-tine, 17-13, after recovering from yet another disastrous start. They conceded a try after just 12 seconds when straight from the the kick-off Connacht fullback Tiernan O’Halloran’s attempted clearance was blocked by Edinburgh openside John Hardie, with Dougie Fife quickest to pick up and cross. Six minutes later outhalf Jaco van der Walt, who had missed the conversion, tagged on a penalty for an easy eight-point lead.

However, Connacht picked up the pieces and within four minutes had bagged the first of two tries in a five-minute period. A penalty to touch provided the opportunity for the first. Blindside flanker Eoin McKeon, in his first match since November after recovering from a calf injury, took the lineout before following up with a super inside pass to O’Halloran who was able to finish off from 15 metres.

Good work in defence then provided a vital turnover on half-way, and after right wing Niyi Adeolokun broke up the touchline with his first chance to stretch his legs, Carty provided the space for centre Tom Farrell to cross. The Connacht outhalf nailed the second of his touchline conversions to give Connacht a 14-8 lead.

Richard Cockerill’s side quickly regained the initiative, and profited when left wing Duhan van der Merwe outflanked the Connacht defence to race in from 20 metres. But the home side saw out the half with a three-pointer from Carty after Edinburgh were pinged for owing off their feet at the breakdown.

It took 20 minutes before the stalemate of the second half was broken. After Carty had sent a penalty attempt wide, Edinburgh replacement Weir reduced the deficit to single point again with a 61st-minute penalty. The change at outhalf was to be a turning point for both sides. Although Connacht scored a try after 66 minutes – a well-worked effort from a penalty to touch on the right wing which was finished on the left by prop Finlay Bealham following a forward drive – Edinburgh replied with another Weir penalty to leave just three between the sides.

With the game entering the final minutes, Weir claimed the victory try after blocking down a Craig Ronaldson kick. Another three-pointer from Scottish international Weir at the death ensured the Scottish outfit maintain their march in Conference B.