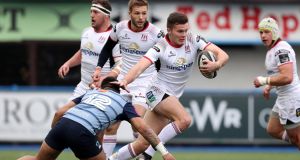 Ulster’s playoff hopes were dealt a hammer blow in South Wales as they fell to a 35-17 defeat to the Cardiff Blues.

Jono Gibbes’s side are now 13 points behind third-place Edinburgh in Conference B of the Guinness Pro 14 with their attention now turning towards maintaining their place in the Champions Cup.

All the visitors could manage was 12 points from the boot of scrumhalf John Cooney and a try from his replacement, David Shanahan.

A smart off-load from Matthew Morgan to Willis Halaholo put the home side on the attack with the former Super Rugby star knocking off the attempts of two Ulster defenders. The ball was then recycled for Evans to touch down under the posts.

The visitors hit back soon after with a penalty from Cooney. Lively fullback Morgan made a sniping break before the ball was recycled for US Eagles international Scully to cross in the corner for their second try.

Ulster’s task became a lot tougher when tighthead prop Wiehan Herbst was sent to the sin bin after clearing out Evans with his shoulder.

Gibbes’s side were given a lucky reprieve on the stroke of half time when scrumhalf Tomos Williams had a try disallowed by the TMO. Halaholo, burst through the Ulster defence before putting Williams over.

But upon studying the television replays there was conclusive evidence that Evans’ original pass to Halaholo had gone forward.

Ulster managed to win a penalty from the ensuing scrum with Cooney knocking the ball over the posts. But the Blues enjoyed the last laugh of the half with Evans knocking over his own penalty meaning Ulster turned around 16-6 behind at the break.

Gibbes’s side began the second half strongly with two Cooney penalties putting them within five points.

But any hope they had went up in flames when Wales hooker Dacey smashed his way over after a period of sustained pressure from the hosts. Blues continued to dominate territory and possession with two late Evans penalties sealing the win.

Shanahan grabbed a consolation try when he beat two Cardiff defenders on the outside to touch down.

The Blues rubbed salt into Ulster’s wound when replacement prop Lewis dotted down after a break from Evans.

1 ‘For 25 minutes I ran out of oxygen’: Pepe Reina on his coronavirus battle
2 Six Nations rugby needs to be protected for terrestrial TV
3 Australian rugby staring into abyss as another crisis hits
4 Garry Ringrose to stay with Leinster as he signs two-year central contract
5 Playoffs set to be moved again as Uefa prioritise European club competitions
Real news has value SUBSCRIBE

Wimbledon will not be held this year due to coronavirus crisis 16:51
Playoffs set to be moved again as Uefa prioritise European club competitions 15:59
Harrington would prefer 12 picks over delayed Ryder Cup 09:06
Australian rugby staring into abyss as another crisis hits 09:03
Ringrose set for new central deal; memories of Björn Borg at Wimbledon 06:51
Here is your handy guide to sport on television this week