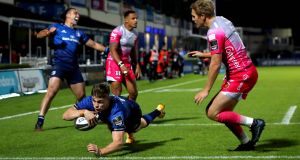 Leinster’s Garry Ringrose scores the first try of the Guinness Pro 14 game against the Dragons at the RDS. Photograph: Ryan Byrne/Inpho

At a ghostly RDS Leinster set about exorcising a few demons when beginning their attempt at a fourth Guinness Pro 14 title in a row with this handsome bonus-point win over the Dragons. In so doing they stretched their winning run to 20 in this competition.

Three first-half tries set up a bonus point came despite the early losses of both Ciarán Frawley with a head knock and Johnny Sexton.

The Irish squad for the upcoming re-arranged Six Nations games against Italy, in three weeks’ time and France a week later is due to be announced next week but Sexton walked off without any stress before icing his calf. Replacements Max Deegan and Andrew Porter also had to be replaced themselves.

With that Irish squad in mind, as well as the heavy hitters like James Ryan, Jack Conan and Garry Ringrose, the in-form Jamison Gibson-Park again caught the eye. He does everything efficiently, is playing with supreme confidence and his sniping was highly effective.

The performance of Rhys Ruddock, looking lighter, fitter and razor sharp, also made you again wonder why he’s featured so little since the resumption. But then again, such are Leinster’s incomparable backrow resources.

The Dragons had a good shape in attack but the energy and desire in Leinster’s defence will have pleased their coaches, even in an endgame without the binned Ruddock. In the final play, Hugo Keenan was denied a deserved try for a second time by fractions. It was patchy but when Leinster were good they were again machine-like.

They thus maintained the average winning margin of 30 points over the last eight meetings between the sides, moving up the gears after an unexceptional start.

When Sexton’s kick-off didn’t go 10 metres, it afforded the Dragons a scrum on half-way. Leinster stayed with it, the pressure coming through to earn the opening penalty. All 15 loudly came in to celebrate. It would have seemed excessive once upon a time, but it was a measure of their desire.

From that first attacking set, a fully stretched Keenan was denied a try from Sexton’s grubber when nudging the ball forward.

Dean Ryan’s side arrived with their trio of high-profile Welsh international signings and were up for it too. Jamie Roberts was initially the most prominent, trucking up first phase ball in familiar fashion for Gibson-Park, Frawley and Sexton (for the umpteenth time in his career) to haul him down. Unfortunately for Frawley, he put his head the wrong side in doing so and was replaced by former Irish Under-20 captain Tommy O’Brien, who settled in neatly.

Leinster’s passing had been a little iffy initially, but they clicked into gear after James Lowe’s line break from Sexton’s deft reverse pass. Eight phases later Ringrose slipped through on the blindside from Gibson-Park’s pass and Roberts was also binned for a high tackle on O’Brien.

Maximising their advantage, Leinster kept the ball for nigh on three minutes from the restart, mixing up their big forward carriers while also going to the edges before Sexton fired a beauty to Jordan Larmour on the left wing. By rights he should have put Ruddock over on his inside, but after using his footwork he was instead helped over the line by Ruddock.

That being Sexton’s last involvement, Ringrose landed the touchline conversion and, as is their wont, Leinster carried on seamlessly with a near reworking of that multi-phase try as good hands by Ross Byrne, Larmour and O’Brien gave Lowe a walk-in by the corner flag. Cue a third touchline conversion by a third kicker, namely Byrne.

Even when Jonah Holmes broke Ringrose’s tackle, O’Brien availed of a slip by Sam Davies to tackle him and clamp over the penalty for a turnover penalty to leave it 21-0 at the break.

When the Dragons came knocking with a close-range lineout, Ryan nicked the throw. Gibson-Park sparked Leinster further into life with another snipe and offload, and when they went to the corner their lineout maul earned a penalty advantage from which Lowe finished strongly in the left corner again off Ringrose’s long skip pass. Again Byrne converted.

The Dragons finally had some joy when Ashley Hewitt finished adroitly in the corner too, with his left hand and the ball the only things inside the touchline. The key had been Roberts’s offloading in the tackle to set up the front-foot ball.

Ryan was denied a rampaging try by Rhodri Williams’s tap tackle. No matter, his younger St Michael’s sidekick Ryan Baird pilfered the Dragons lineout and burst through a couple of feeble tackles to scamper over within three minutes of replacing an injured Deegan.