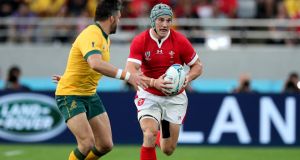 The Scarlets’ Jonathan Davies in action for Wales in the 2019 World Cup: he makes his first competitive outing since the World Cup. Photograph: Craig Mercer/Inpho

In hindsight, last season’s truncated campaign looks like even more of a missed opportunity, given Munster only faced their main Conference B rivals Edinburgh and Scarlets, once apiece and both games were at home.

No wonder Johann van Graan identified the 18-16 defeat by Edinburgh for consigning them to another away semi-final against Leinster. By the same token, the 29-10 win over the Scarlets last February edged the Welsh team out of second place. Hence, with Edinburgh to come in Limerick next Saturday, these two games look significant.

Compared to the side which lost to Leinster a month ago, Mike Haley and Darren Sweetnam make their first appearances since February while Craig Casey comes in for the injured Conor Murray. It’s also a changed frontrow, while Jean Kleyn returns to the secondrow.

The Scarlets, who hit the ground running post-lockdown, are boosted by the return of Jonathan Davies for his first competitive outing since the World Cup in one of three changes from the side which lost 11-6 away to Toulon in the Challenge Cup. The 21-year-old Tom Rogers makes his Pro14 debut in place of the injured Johnny McNicholl.

The recently promoted head coach, Glenn Delaney, was in “bring it on” mode when saying of Munster: “They’ll be physical, they’ll be direct, they will maul, they will brawl, they will be great in the collisions and they’ve got players who can break you.

“So, it’s a really good side we are going to face and it’s a wonderful challenge. What a great way for us to start off the Pro14 with a full-blooded contest against them!”