Leinster in seventh heaven as they rout Ospreys at the RDS 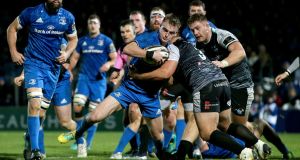 Leinster’s Nick McCarthy scores a try during the Guinness Pro 14 game against the Ospreys at the RDS. Photograph: Tommy Dickson/Inpho

Leinster tightened their grip at the summit of the Guinness Pro 14 Conference B table with a resounding seven-try victory over a flat Ospreys side at the RDS on Friday night.

With seven different try scorers over the course of the contest, the Blues move 10 points clear of second-place Scarlets.

On his side’s return to competitive action – their most recent run-out was the 38-31 victory over the Southern Kings on November 4th – Leo Cullen fielded an experimental line-up. Although openside flanker Scott Penny was the sole newcomer in the starting team, replacements Jimmy O’Brien and Jack Kelly featured in a matchday squad for the first time.

Fullback Hugo Keenan was also making his full debut in the back three, following single appearances off the bench in the past two seasons. In the absence of Johnny Sexton and Ross Byrne, Ciarán Frawley was offered another chance to impress at outhalf alongside Nick McCarthy.

While the quartet of Adam Byrne, Noel Reid, James Tracy and Michael Bent have all been capped at international level with Ireland, Scott Fardy was the ideal choice to lead out the team on the night.

The Wallabies veteran utilised all of his experience in the 12th minute of the opening half to break through a gap and set up Conor O’Brien for a simple run under the posts. Leinster were under the cosh prior to the Mullingar man’s second try of the season, but eventually turned over Ospreys on their own five-metre line.

Frawley was on hand to apply the extras to O’Brien’s breakthrough, offering the hosts early breathing space in this round nine affair. The Skerries native also dispatched a penalty between the posts inside the second quarter, as the Blues gradually increased the pressure on their Swansea visitors. Despite having a number of household names on show – James Hook and Sam Davies most notably – Ospreys struggled to build on their encouraging start.

Their woes were further compounded past the half-hour mark as Penny finished off a powerful lineout maul to mark his debut in style. After Frawley stretched the Leinster advantage to 17 points, Davies discovered space on the right-hand side to release Hook for a smooth touchdown.

This score was ultimately ruled out for a Johnny Kotze infringement on Noel Reid in the build-up.

The home crowd were back to their feet on the stroke of half-time, when McCarthy broke free for an outstanding converted try.

With a 24-0 interval buffer at their disposal, it was only a matter of time until Leinster claimed their sixth try bonus of the campaign. A five-metre scrum presented Leinster with the perfect opportunity to extend their advantage and Fardy added his name to the scoresheet after TMO Colin Stanley ruled in his favour.

Despite the presence of seven Academy stars in their 23, it was turning into a surprisingly routine evening for the Blues. Though it was a relatively quiet night for the generally in-form James Lowe, the tries continued to flow.

Ed Byrne heralded his entrance to the fray with a powerful drive over the Ospreys line on 56 minutes. This was supplemented by Max Deegan’s five-pointer from close range after a sublime piece of skill from Adam Byrne on the right flank.

Replacement Bryan Byrne – via a neat off-load by his twin brother Ed – registered his 10th career try for Leinster seven minutes from time. Even though Hanno Dirksen finally breached their defence in the closing moments, it did little to dampen the mood in the south Dublin venue.

Replacements: S Parry for Otten, L Morgan for Hook (both 45 mins); G Thomas for Jones, A Jeffries for Botha, R McCusker for Nemsadze, T Williams for Kotze (all 59), M Aubrey for Habberfield (63), W Jones for Cross (67).