Connacht flying high on back of smart use of system 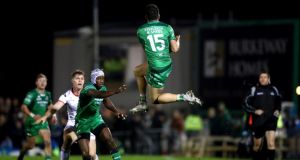 Home-grown talent Tiernan O’Halloran in action for Connacht against Ulster at the Sportsground as team-mate Niyi Adeleokun, who was born in Nigeria, looks on. Photograph: James Crombie/Inpho

There may have been a few gasps at the breadth of Connacht’s win over Ulster in their Christmas meeting in Galway. That scalp and the possibilities for Monday’s match with Leinster in the RDS should ensure proceedings have a festive edge.

Despite what Pat Lam achieved and despite Connacht’s ability to paddle their own canoe and step up their game to beat the so-called premier provinces, Ulster and before that Munster, the once patronising tone whenever Connacht mixed it with the heavyweights and came out on top has vanished.

A delegation of assistant Irish coaches including Andy Farrell, Greg Feek and Richie Murphy watched Connacht defeat Munster 20-16 in October. Assisted by an Andrew Conway red card, it was, nonetheless, the first demonstration this season of Connacht self belief. Ulster were next to fall, 44-16 last week.

But Connacht have overcome their smallest province status and played the smart game with their use of players not born in Ireland. Ulster to a lesser extent have done the same.

The home-grown Connacht talents like Tiernan O’Halloran, who grew up in Clifden, played rugby with Connemara and attended Garbally College in Ballinasloe, Darragh Leader who went to local Galway school the Bish (St Joseph’s College) and Eoin Griffin among others are testament to what can be done locally. But there is no team in any of the European competitions that does not need to work the system intelligently.

Provincial wellbeing also has a tremendously positive influence on how the Irish team performs in the Six Nations Championship.

Lions and Ireland lock Iain Henderson said as much when he was in Dublin two weeks ago after a Joe Schmidt-led panel session in Carton House. Henderson agreed that the provinces performing over Christmas and especially in Europe during the weeks of January – against La Rochelle, Glasgow and Racing 92 – can build a scaffold of confidence in the run in to the Six Nations.

Performances by the provinces against the provinces are also a mood determining factor, although that tends to be more personal and involves rivalries between players.

“When you are in camp you kinda focus on yourself but you could tell everyone was in good mood,” said Henderson about the hit out with Schmidt earlier this month.

“Prior to the September camp we had just lost to Leinster so you could tell the Ulster boys were a bit annoyed, not annoyed, but pissed off. But you go down there [Carton House] and it is a good feeling to go down after a couple of especially good wins over an interpro rival.”

Nine of the players on the defeated Ulster side were also born outside the province prompting a question to Henderson about the current breaking down of the cultural borders that used to exist between the provinces.

“That’s something we’ve spoken about before, trying to let the boys who come up know what we’re about, how we have our own identity; we’re not just a feeder club for Leinster who’ll pick up the scraps,” said Henderson.

“The boys who have come up have really related to it. John [Cooney] is really enjoying himself, and a prime example is Alan O’Connor. He didn’t get the opportunities that he should have got at Leinster but he’s been here for three or four seasons and I think he’s a top-quality player for us. I think he is someone who really buys into it. Al would probably call himself an Ulsterman now.

“Nick Timoney is another who maybe didn’t get the opportunity he deserved, maybe not deserved, but because Leinster have such a backlog of top quality backrows, the opportunities aren’t there.”

In the replacements Tom McCartney is New Zealand born, Peter McCabe is from Cork, Conor Carey and James Cannon are England born, while Naulia Dawai was born in Fiji and James Mitchell has England as his birth place.

Schalk van der Merwe is South African born, Greg Jones is from St Andrews School, Dublin and Johnny McPhillips has a mother, Honor, from Waterford and a father, Tony, from Belfast and was born in Newcastle, England.

Ulster are also ready to welcome Leinster’s Spanish-born Blackrock College backrow Jordi Murphy and Castleknock’s Marty Moore – both of whom are on their way to Belfast for next season.

The influx of players such as Timoney, Cooney and Moore (via Wasps) from Dublin has been a recent trend as both Leinster and Munster, at least in this one -day festive snapshot of the players being used, rely largely on their own hinterlands for players.

In their gripping match against Leinster, Munster used 17 players born in the province, mostly from Limerick and Cork. Of those not, Andrew Conway was born in Dublin, Sam Arnold in Surrey, England, Alex Wootton near Manchester and Jean Kleyn and CJ Stander South Africa.

Similarly the conveyor belt in the Leinster region and the schools system supplies enough players for the provincial team needs and even surplus quality in some positions – such as the aforementioned former Blackrock College student, Conway.

Of the 23-man match day Leinster squad that recently defeated Munster in Thomond Park, 15 of the players were born in Dublin with several more coming from Leinster counties and that includes giving Athlone’s Robbie Henshaw his Connacht status.

Broadly speaking, Leinster and Munster have the numbers to mainly fill their squads with Ulster and Connacht needing to be more creative. But the point Henderson was emphasising was the importance of those players coming while also maintaining the very essence of the province, something former Irish hooker Bernard Jackman is now trying to create at Dragons.

Jackman, with his experience of Irish rugby, is trying to draw from the Gwent hinterland and create a sense of identity that is in essence Welsh and in particular of the region just as the Irish provinces have been doing for more than two decades.

“It’s probably breaking down,” says Henderson about the reluctance to move within provinces. “And it has to do with the levels of professionalism increasing. As they have increased maybe people lose a bit of ego about who they play for.

“They are not as stubborn and realise that for their own career it may be a lot better to move somewhere else, even though it may be one of their biggest rival clubs.”

Where is this all going? Well if Irish teams can get through the interprovincial series without too many injuries and secure a couple of home quarter-final places in the Champions Cup in January, the international players from those clubs will be better positioned to aid Schmidt’s plans for the Six Nations. A championship showdown against England in Twickenham is wishful thinking but not outrageously so.

That sense of confidence, self-worth and equality with the best players and teams in Europe will have been made possible because of all of the players’ involvement with Leinster, Munster, Ulster and Connacht.

As Ulster and Connacht particularly have shown, playing the judicious intelligent game in a needs-must pragmatic way benefits everyone, including Schmidt.

“To say what makes us different from other provinces is difficult to say,” said Henderson. “At Ulster we are quite proud of our values.

“What we have been trying to do with the players coming from the other provinces is . . . Tommy Bowe heads up a committee that once or twice a month has past players coming in and getting involved around the squad. They have a chat with the younger lads and just give them a feel for what it means for other local players, for what it meant for them.”

The prospect of moving continents or two hours up the road no longer fills players with dread and it’s the way rugby is evolving. Provincial and Irish success is not despite some players being born outside of Dublin, Belfast, Galway, Limerick or Cork but because of it.

1 Who is Caelan Doris? Meet Ireland’s newest rugby star
2 Winds of change as Ireland name a refreshed team, picked on form
3 Ireland v Scotland: Murray keeps Cooney at bay in starting lineup
4 Jacob Stockdale is back on form and ready for the Six Nations
5 Owen Doyle: Breakdown of law and order in rugby must stop
Real news has value SUBSCRIBE