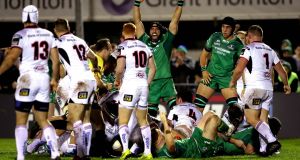 In the wake of last Saturday’s record defeat at the hands of Connacht, the outlook has become decidedly grim around the Kingspan Stadium, with the pressure very much on to produce an appropriate reaction against Munster on New Year’s Day.

And the heat has also been turned up on Les Kiss in the wake of the 44-16 hammering his injury-hit side took at the Sportsground.

Coughing up six tries to Connacht meant that the northern province’s already notable defensive frailty – even though they had not lost for four games prior to last weekend – was well and truly laid bare along with an alarming inability to even perform the basics of the game.

“That was not what we are about,” Kiss said on Thursday of the Connacht defeat.

“I have got to say I did not see it coming and I’m very disappointed in it. Equally, the players are disappointed in that performance – it is not what we expect of ourselves.

“We are cut, we are hurting, but we have got to make sure we do whatever necessary to return next week [against Munster].”

Nothing less than a decent outing against Munster is now the basic requirement on the opening day of 2018, and especially so with a daunting trip to Leinster coming five days later.

The prospect of three straight Pro14 reverses leading up to Ulster’s pivotal European Champions Cup home game with La Rochelle would be hugely damaging for the under-pressure Kiss who one local Sunday newspaper has claimed is already unlikely to see out his contract – which runs until summer 2019 – beyond this season.

Kiss reacted to the growing criticism of his tenure by batting it away, though clearly it is having an effect.

“The noise is out there and it’s been out there for a while,” he said.

“But I understand it. Everyone can have an opinion and I know there are things that have been mentioned or said or whatever.

“There is criticism, that’s fine, but my job is to not to be sucked into that vortex, my job is to stay on this and I believe what we’re doing is the right thing and we’ve got to respond on Monday.”

The Conference B table makes for none-too-pleasant viewing, with the Scarlets and Leinster stretching away from the third-placed Ulster while, rather ominously, Edinburgh are a mere three points behind, snatching a quarter-final place from Kiss’s embattled side.

The possibility of another season without knockout rugby is sure to focus minds at the Kinsgpan and would surely result in Kiss going early.

Ulster will go into battle against Munster – coming off their own defeat to Leinster on St Stephen’s Day – without Iain Henderson and Jacob Stockdale, who are rested, but Kiss at least has back-rower and former Munster player Jean Deysel back for the first time since October’s home defeat to Leinster.

Charles Piutau also returns after picking up a leg injury against Harlequins, and Christian Leali’ifano will also be back in the starting side.

Rob Herring has completed his return-to-play protocols and will start, while it is hoped that centre Stuart McCloskey will have overcome sickness to make the side, while lock Kieran Treadwell suffered an ankle issue in training and is touch-and-go.

Props Kyle McCall and Rodney Ah You are available again after a period out.

But a mixture of sickness and injury have accounted for John Andrew, Matt Dalton, Sean Reidy, Chris Henry, Tommy Bowe, Luke Marshall and Rory Best, while Jared Payne continues to be sidelined.

Head coach Jono Gibbes is also back on board after spending Christmas back in New Zealand.

All told, then, Kiss doesn’t exactly have his mightiest side available to him for a sold-out interprovincial that has plenty of spice about it now, against a Munster side who have a decent record in recent times when it comes to getting the better of the northern province.

“Absolutely, I’d expect it,” was Kiss’s response to what Ulster hope will be a mighty performance.

“You don’t want to be in a tussle for third,” he added of the current Conference B table. “You want to break away from that.

“I’m sure Glasgow will help us out,” Kiss quipped of their forthcoming clash with Edinburgh, “but first and foremost we have to help ourselves.”