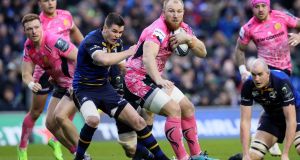 Leinster’s Johnny Sexton is to return from the injury he suffered while tackling Exeter Chief’s Matt Kvesic in the Champions Cup game at the Aviva Stadium. Photograph: Brian Lawless/PA

It sometimes seems casually spiteful that Ross Byrne’s fine performancesare wholly eclipsed in the clamour to trumpet Johnny Sexton back on to the Leinster main stage.

Once again Sexton’s return is expected for Leinster’s game against Connacht on New Year’s Day. At 32, the outhalf is viewed like a fine wine, each taste to be savoured.

His reintroduction to Leinster training yesterday heralds his return from a head injury.

A clash with Exeter flanker Matt Kvesic caused his short stay away from competition. The outhalf has passed the barrage of tests players go through for suspected concussion and is expected to be available for selection by Leo Cullen.

“Johnny Sexton has come through the return-to-play protocols and is due to be available for selection,” read a brief Leinster statement.

With Seán O’Brien still in the wars, his inclusion for the Monday RDS meeting is in doubt. O’Brien carried knocks into the European Champions Cup match with Exeter and is still in recovery phase. For the Connacht match, he remains a doubtful starter.

Richardt Strauss (back), James Ryan (ankle) and captain against Munster last time out, Jack McGrath, have been sidelined and are not in contention to try to prevent Connacht registering a third provincial win in the space of eight weeks or so, after already claiming the scalps of Munster and Ulster.

“Jack McGrath was withdrawn for a head injury assessment at half-time against Munster,” said the Leinster statement. “And he did not return to the field of play. He has now entered the return-to-play protocols.”

Kiwi backrow Jarrad Butler had no ill effects following his return to play against Ulster. Backs Rory Scholes and Cormac Brennan also remain on the list.

Munster and Ulster face each other in a battle to reclaim lost ground after recent defeats with Munster’s JJ Hanrahan hoping that his injury-plagued six months is fully behind him.

The Munster outhalf admits there is more to come but so far so good after a patient period of being confined to the sidelines.

“I was just trying to find my feet early days and you can’t expect really to walk into this team. So for me it is just grafting every day and keeping my head down.”

Hanrahan’s stint with Northampton was a mixed bag and he was confined to just 10 matches in his second season. But he’s determined to kick on with Munster.

“I suppose it depends on what you deem success as,” he says of his Premiership years. “If you deem it as on the rugby pitch, playing every week, probably not so much because my second year I was only available for 10 games through injury, so you would say ‘No’. In terms of an overall holistic approach, from a growth mindset, you would say ‘Yeah’.”

For now an opportunity to play against Ulster would be as much as Hanrahan is seeking.

“Yes, if I get the chance against Ulster,” he says. “It is not easy up there. Kingspan can be a hostile enough place as we all know, but I think it is a challenge you have to relish.

“They are coming off a big defeat against Connacht. They will definitely be hurting. Whoever Johann [van Graan] selects for that game, they would want to be ready for it. Put it that way.”

Sexton and Henshaw to miss Ireland’s clash with Georgia 10:04
Knockout All-Ireland could be the way forward; Gerry Thornley on Ireland’s lineout 07:27
Eoin Morgan: More than England’s captain, Dubliner is the team’s touchstone 06:00
Gerry Thornley: Ireland don’t want to box themselves into a corner 06:00
Kevin McStay: Maybe a knockout All-Ireland Championship is the long-term solution? 06:00
Here is your handy guide to sport on television this week