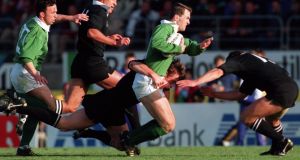 Neville Furlong in action for Ireland during the 1992 tour of New Zealand. Photograph: Billy Stickland/Inpho

Neville Furlong, who won two caps for Ireland during their 1992 tour to New Zealand has died at the age of 49 following an illness.

The former Wexford minor and under-21 footballer took up rugby when he went to University College Galway and went on to represent Garryowen, Connacht and Ireland A before being selected for the tour.

He scored a try on his debut in the first Test against the All Blacks as Ireland almost shocked their hosts before losing 24-21 and lined out in the second Test despite carrying an injury. His try was Ireland’s last four-point effort as it was increased to five later that year.

A tall, strong wing Furlong served Garryowen with distinction as a player, helping them to an All-Ireland League title in 1995, coach and administrator.

Connacht chief executive Willie Ruane said: “On behalf of everyone in Connacht Rugby I would like to express my deepest condolences to the Furlong family on Neville’s sad passing.

“Neville represented the province in the 1990s and was capped twice for Ireland in the tour of New Zealand in 1992. The entire rugby community is in mourning following his untimely passing.”