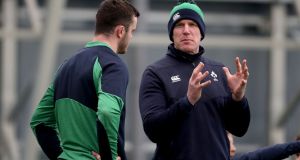 Graham Rowntree has backed Paul O’Connell to be a success in his role as Ireland forwards coach. Photograph: Dan Sheridan/Inpho

Graham Rowntree has hailed the “brilliant” appointment of Paul O’Connell as the Irish forwards coach and forecast that the former Irish captain will be a success in his new role.

Rowntree worked with O’Connell as the Lions forwards coach on the 2013 tour to Australia, which was O’Connell’s third as a player, and believes that he can make an immediate impact and bring something extra to Ireland’s forward play in the forthcoming 2021 Six Nations.

“I think Paul has an aura about him and I always thought he would take to coaching,” added the Munster forwards coach. “He loves the lineout. Crikey, he loves the lineout. He will give them a bit of steel and some much valued experience and energy. I think he is a brilliant appointment.”

Rowntree was speaking after the squad’s training session at their HPC in the University of Limerick, which took place without the 10-strong contingent named in Ireland’s 36-man Six Nations squad.

With Craig Casey and Conor Murray amongst those 10, and Neil Cronin continuing to rehab a long-term knee injury, two scrumhalves have joined training. Ethan Coughlan, the Ennis RFC and National Talent Squad member, has returned to the squad having trained with the team earlier this season and Leinster Academy member Paddy Patterson has also joined the province on a short-term basis.

Helped by an influx of players from their academy during the season’s first international window, Munster won their first seven Pro14 games. Facing into another sequence of six games without their frontline Irish Test players, beginning with Saturday’s game against Benetton in Treviso, Rowntree said: “We backed some youngsters (last year) didn’t we?”

“Those youngsters have been put in the squad in terms of standards and putting pressure in the older guys. The Test players have left us again so we will be looking again to those young guys and the same performances. They have been fantastic across this season. We have backed them, they have delivered, and that has shown a lot of the other younger players that if you perform you will get your chance. Like I have said before, that then puts pressure on the senior players as well, so it is a good dynamic.”

Munster’s task, ironically, over the next while has been made more difficult by Casey, the uncapped 21-year-old, being called into the Irish squad.

“I am not surprised he has been called up,” said Rowntree. “It is a pleasure to work with the guy day in and day out. His diligence, he is last of the field, the effort he puts into his game, he has got the most out of his physique and I have not worked with many more diligent players than Craig. He is a joy to work with. He will be there for a long time I can see.”

Reflecting on last Saturday’s defeat by Leinster at Thomond Park, Rowntree batted away a suggestion that one or two decisions might have gone his team’s way.

“You get that in every game. You cannot be looking at those decisions, praying that they could have gone the other way for too because it would drive you mad. It’s often been said by coaches, we look at what we can control, what we can do better.

“Our set-piece, for example, our lineout has been widely spoken about. Tactically what we can do better but we are not far off are we? We could, maybe should, have won that game, but we didn’t and you’ve got to look at why, quickly fix that and move forward.

“It was a tight game again, wasn’t it? Fine margins. Incredibly frustrated, but we are over that now because we have another big game this week. We have had a good look at it, and we need to help ourselves in the areas we can control.”

Looking ahead to the challenge presented by Benetton, who sit bottom of Conference B after losing all nine matches to date, Rowntree maintained: “They are desperate to move the ball, are quite aggressive in contact and have many threats around the breakdown. So it’s a big, big challenge for us, probably exactly what we need after last Saturday’s disappointment.”