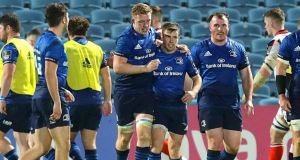 The primary number keeps spinning for Leinster as Leo Cullen’s charges racked up a 25th consecutive win in the Pro14 as they thrashed an overmatched Edinburgh side with an eight try salvo.

Dan Leavy had amassed 72 minutes of game time across three matches as a replacement before being handed a starting jersey on Monday night and he was straight into the action, catching the kickoff and then a couple of minutes later crashing through a couple of tackles.

He was prominent throughout, his application rewarded with a try early in the second half before being replaced by a fit again Ryan Baird on 57 minutes but not before claiming the man-of-the-match accolade.

In truth there were several standout individual performances. Jimmy O’Brien has been consistently excellent this season and once again produced an impressive body of work in attack and defence.

Luke McGrath was superb quite apart from his two tries, so too Scott Penny, while the frontrow and the pack in general gave their halfbacks - Harry Byrne ran the game nicely - and three quarters premium possession. Ciaran Frawley offered a polished display at inside centre to supplement his place-kicking prowess, while Cian Kelleher’s hat-trick was a decent reward for his work-rate.

Leinster’s discipline was an issue initially, four in succession costing them possession and territory, the first for going off feet at a ruck, the second for coming in the side at a breakdown, the third for a ‘no arms’ tackle and a fourth for offside from a high ball. Edinburgh kicked to the corner but an overthrow would prove very costly for the visitors.

Leinster worked the ball to fullback O’Brien and from his ‘daisy cutter’ kick into the Edinburgh 22, Leavy won a superb turnover and a couple of phases later O’Brien’s beautifully weighted grubber saw Dave Kearney win the race to dot down. Ciaran Frawley couldn’t land the touchline conversion into a swirling wind.

On 19 minutes Leinster struck again following McGrath’s clever exploitation of the short side from a ruck. The scrumhalf put Kearney away before accepting a return pass to scoot over for a try. Frawley’s conversion was a gem. The next one he landed was more straightforward, improving upon a try from Peter Dooley following a quick tap penalty and right on half-time Leinster recorded their fourth, and bonus point try, a second for McGrath, the scrumhalf demonstrating pace and footwork. Frawley once again converted.

The visitors once again were left to rue conceding possession carelessly as Leinster swept 75-metres, three minutes after the re-start, with Leavy eventually forcing his way over for a try. Frawley’s conversion made it 33-3 and the only consideration at that point was the final score.

The bad news for Edinburgh was that Leinster’s appetite wasn’t sated and they ruthlessly punished most of the Scottish side’s plethora of errors. Leinster’s right wing Kelleher crossed for a brace of tries in a five minute spell and even though Edinburgh responded with a try from replacement scrumhalf, Nic Groome, the home side showed how lethal they are from turnover ball, Penny the creator, Kelleher the beneficiary for his hat-trick.

Mason Jones not interested in being the Welsh Conor McGregor 12:01
Charles Byrnes’ licence withdrawn after runner ‘nobbled’ with a sedative 12:52
JP McManus Pro-Am deferred for a year due to Covid 10:45
James Harden stars as Brooklyn Nets edge Bucks in thriller 09:17
Spanish player says Australian Open quarantine is like prison 09:06
Here is your handy guide to sport on television this week