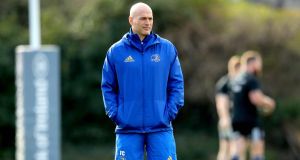 Felipe Contepomi’s grin is the giveaway. A sparky outhalf fielding questions on the recent frustrations of Johnny Sexton is open to a rash of apparent contradictions. Even Contepomi knows that.

“I’d say do what I say, not what I did,” he clarifies. The fire that makes Sexton the influential player he has become also gives him some sharp edges. The Argentinean always had a low boiling point and with the sneaky hits, the late tackles and the target on his back, the only option at least for fleeting self-satisfaction was to sometimes strike back.

“I was a very fiery guy as well, sometimes I reacted not in the best way, maybe even fighting. That takes you out of the game, so that’s not the right decision,” he says. “Definitely for a 10 and a playmaker, to receive cheap shots will always get you out of the game, or you’ll get frustrated.

“I understand his decision, you can see him not reacting, talking to the ref, staying down and then people ask why is he staying down? If he stands up, it’s ‘he should have stayed down. It makes it look worse’.”

The bandaged Sexton was angry and Conor Murray was grumpy. Those are Joe Schmidt words. If there was a hint of a hamstring tightening that would be enough for Sexton to fear the worst. As always the demeanour of the Irish outhalf is a reflection of the Irish team.

His grievances and disappointments are theirs too and his dissatisfaction needs little explanation about where Ireland are in their World Cup year. They are not where they had expected to be, kicking on with points on the board but a whole lot of questions begging about performance.

With France on the horizon, there is also an essential difference between an Irish team that beat the All Blacks three months ago and a French team that has magnificently underachieved for a number of years. Sexton kicking objects out of his way leaving the pitch is symptomatic of a dip but not a trend. There is a difference.

“The beauty of sport, is you can – for good and bad – turn it around in a very short time,” explains Contepomi. “Definitely you can see a trend like the French team. They’ve been under a lot of pressure. They haven’t been getting good results for a long time. That’s a trend.

“But coming to Ireland, I still believe they’re in a good spot. Three months ago they beat the All Blacks. Maybe there’s one of those dips in performance and they may not be happy. But it’s part of their learning and getting better. It’s what they have to go through to get better.”

What the Leinster backs coach is getting to is Sexton and Murray are no different to the other players that beat Italy and Scotland and lost to England. They might draw a disproportionate level of attention because they have their hands on the ball and make more decisions.

But they are intertwined. Contepomi’s musical metaphor seems apt, where the conductors are struggling and the musicians are not getting their timing right, fractionally coming in at the wrong moment or the symphony playing soft when it needs forte. They will get through the concert but have to be better next time.

“Conor Murray and Johnny, nine and 10 are the conductors in every team, but it’s not about themselves alone,” says Contepomi. “Everyone has to play their own part inside the team.

“Sometimes we don’t perceive the small details that make some plays work. They might not have anything to do with nine and 10. Maybe it’s the hooker holding his width and on TV he’s out of camera and you can’t see it. But that’s what makes the move work, or the team work fluently.”

As Contepomi might say, that’s the coach talking, not the combustible player.