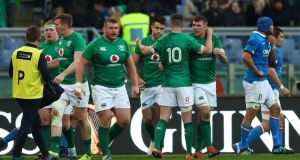 Ireland celebrate after Conor Murray scores a try in their Six Nations Round 3 match against Italy at Stadio Olimpico, Rome on Sunday. Photograph: James Crombie/Inpho

Ireland haven’t been at their best in this Six Nations. Everyone on the outside can see it, and on the inside they know it better than anyone. What is particularly mystifying is that not only does no one on the outside really know the reasons why, but the team are a bit puzzled themselves.

The flaws are readily identifiable, the most obvious of which is Ireland’s utterly uncharacteristic failure to protect possession with their normal accuracy.

In the Stadio Olimpico on Sunday there were costly lineout issues (at least one of the five lost throws could be said to have cost Ireland seven points and another contributed to Italy scoring five of their own).

As was the case last November, Devin Toner’s reputation is being enhanced further in his absence, and, in Seán Cronin’s defence, the issues continued after he was replaced at hooker by Niall Scannell.

Maybe it’s a mirage, but Ireland look a little weary, or leggy

But Simon Easterby, Joe Schmidt and the players will know darn well that with their strongest cabal of locks in yonks they will have to learn to function without Toner, not least as he won’t be around for the final two games either.

Even more alarmingly, there were 15 handling errors, and three of them – along with the first overthrow – in the opening 10 minutes. This was compounded by a couple of Johnny Sexton restarts which went out on the full in the swirling wind, the second to start the second-half which was then compounded by Rob Kearney, of all people, dropping a high ball.

The official stats credited Ireland with 18 turnovers, but throw in a lineout maul which went to ground and so led to an Italian scrum, and with all of the above that figure could just as easily be 24 or so. That’s more than one every four minutes.

That is not the Ireland team we know.

In addition to a lineout which malfunctioned, Ireland are also leaving other try-scoring chances behind, such as when Keith Earls couldn’t hit Jacob Stockdale after a sweetly executed midfield strike play with Sexton and Chris Farrell, and finally when Stockdale’s pass didn’t hit Earls in the game’s final play.

Twenty-plus turnovers and two tries missed with the final pass. It’s a wonder that, actually, Ireland still won with a bonus point. Indeed, viewed in that light, to manufacture a first comeback win from a half-time deficit in 11 attempts dating back to the second test in Argentina is not to be sniffed at.

Maybe it’s a mirage, but Ireland look a little weary, or leggy. Aside from the missed tackles, their defence again lacked zip, or aggressive line speed. This was particularly striking in comparison to the Italian defence, which even when defending through the phases repeatedly managed to have one or more players shooting up from the defensive line. Ireland were relatively passive. This contributed to them coming off second best yet again in “dominant tackless”, Italy making 19 to Ireland’s 10. Yes, Italy made 19 dominant tackles to Ireland’s 10. Hard to fathom.

Admittedly, there’s a danger, akin to the Scots in Murrayfield, of underestimating this Azzurri side. They were far stronger than any of the outfits Ireland piled half-centuries on in each of the previous four meetings. And Italy were at their strongest in this tournament so far simply by dint of having the outstanding Tito Tebaldi back.

Joe Schmidt rightly contends that the first overthrow by Cronin to an unchallenged Peter O’Mahony after a superb 45-metre penalty to the corner by Sexton rather set the tone for the line-out foibles that followed. Notwithstanding the fact he had a low sun in his eyes, it would have done Cronin the power of good had his throw located O’Mahony, and if Ireland had rumbled over then one ventures the match might have panned out rather differently.

In that scenario, not only Cronin – making his first Six Nations start after 32 appearances in the tournament off the bench – but all his teammates could have taken a deep breath and motored on, rather than force passes. Even then, had Earls and Stockdale – both of whom were potent threats when they were on the ball and each of whom took their tries opportunistically – combined effectively with those aforementioned final passes there would have been an altogether different sheen on the scoreboard. The debate would not nearly be as negative.

They became too easily unnerved by the loss against England, and then too readily unhinged by mistakes

Except that, of course, this is the third game running when Ireland have fallen short of their own exacting standards, and it is starting to show in their body language. Close-ups of Irish players after individual mistakes betrayed signs of their clear agitation. Word is that they are training well and this was especially true in the build-up to last Sunday’s game. But come kick-off the old doubts return to haunt them.

They became too easily unnerved by the loss against England, and then subsequently – especially so in the Stadio Olimpico – they have become too readily unhinged by mistakes. In the build-up to the game, Conor Murray said there was an anger in training, which he also believed was a good sign, but on Sunday in Rome they looked too angry, with themselves and each other.

This Ireland team wouldn’t be the first to be afflicted by “trying-too-hard” syndrome, and, of course, the harder a team tries when it’s short of confidence, the more they push the pass and the more likely they are to make the kind of mistakes we saw on Sunday.

They look like they could do with a good knees-up. They need to start enjoying their rugby again. In this, there has been idle talk of drawing comparisons with the weary and fraught World Cup campaign of 2007. It’s nothing like as bad as that. Honestly. And at least it’s happening now, and not in the World Cup.

But if this drags on into the upcoming encounters against France and Wales, the damage could be lasting. Which makes these two matches very important indeed.